Please note this page was last updated in 2019. While our overall views remain unchanged, some details may be out of date.

This is a summary of our cause area report on Safeguarding the Future. The full report can be found here, and the giving recommendations relevant to this research are:

Homo sapiens have been on Earth for 200,000 years, but human civilisation could, if things go well, survive and thrive for millions of years. This means that whatever you value—be it happiness, knowledge, creativity, or something else—there is much more to come in the future. As long as we survive, humanity could flourish to a much greater extent than today: millions of generations could live lives involving much more happiness, knowledge, or creativity than today. Therefore, for members who value future generations, a top priority should be to safeguard the future of civilisation.

This is an especially urgent time to focus on safeguarding the future. Homo sapiens have survived for 200,000 years without being killed off by natural risks such as asteroids, and volcanoes, which is evidence that these pose a relatively small risk. However, the major risks we face today are man-made, stemming from our increasing power to affect our material conditions.

1.1. The Industrial Revolution and man-made risk

From the dawn of humanity until 1800, the rate of technological innovation across the globe had been quite stagnant, even as humanity moved out of hunter-gatherer societies into agricultural and pre-industrial societies. The trend of stagnation ended abruptly at the dawn of the Industrial Revolution in northern England in 1800, as innovation, automation and living standards soared.

Since the Industrial Revolution, we gained the power to feed a growing population, to reduce child mortality, and to create technologies allowing us to travel and communicate across great distances.

However, our power to improve our material conditions increased in tow with our destructive power. According to work by Professor Ian Morris of Stanford, war-making capacity also exploded after the Industrial Revolution.

Figure 2. Trends in war-making capacity in the last 3,000 years 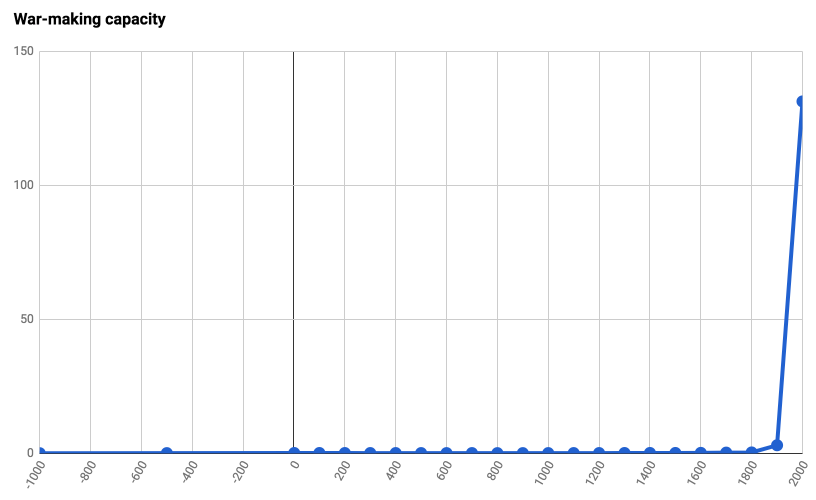 Source: Luke Muehlhauser, ‘How big a deal was the Industrial Revolution?’ using data adapted from Morris, The Measure of Civilization, Princeton University Press (2013)1

The most dramatic shift in our destructive capacity came with the invention of nuclear weapons in 1945. This marked the dawn of a new epoch in which humanity for the first time potentially gained the ability to destroy itself. Developments in other areas may potentially be even more serious than nuclear weapons. Biotechnology and AI will greatly improve living standards, but according to many experts working in those fields, also carry potentially serious downside risks. Similarly, the burning of fossil fuels drove the huge increases in welfare we have seen over the last 200 years, but has caused CO2 concentrations in the atmosphere to rise to levels unprecedented in hundreds of thousands of years, increasing the risk of extreme climate change.

1.2. Safeguarding the future is a highly neglected problem

Moreover, because the risks are unprecedented, increasing in the future, and also relatively unlikely, they are not salient to the public or to political leaders.2 Consequently, leaders will tend to pay insufficient attention to them.

Finally, due to the psychological bias of scope insensitivity, people are insensitive to the large numbers at stake in global catastrophes. Our emotional reaction to finding out that a problem kills 1 million people or 100 million people is similar, and yet these tragedies call for very different social responses. The implications for global catastrophic risk are clear: there are trillions of potential lives in the future, but people may not take adequate account of this when thinking about the importance of global catastrophic risk.

For all these reasons, global efforts to safeguard the future have tended to be inadequate. For prospective donors, this means that the potential to find “low-hanging fruit” in this cause area is high at present. Just as VC investors can make outsized returns in large uncrowded markets, philanthropists can have outsized impact by working on large and uncrowded problems.

Estimating the overall level of global catastrophic risk this century is difficult, but the evidence, combined with expert surveys, suggests that the risk is plausibly greater than 1 in 100.3 Given the stakes involved, we owe it to future generations to reduce the risk significantly.

Based on expert surveys and our own reading of the evidence, we believe that the greatest threats to the flourishing of future civilisation stems from advances in biotechnology and advanced AI systems, with nuclear war and climate change also posing some risk.

The discovery of nuclear weapons marked the dawn of a new epoch in which humankind may for the first time have gained the ability to destroy itself. The most concerning effect, first raised during the Cold War, is a potential nuclear winter in which the smoke from a nuclear war blocks out the Sun, disrupting agriculture for years. The potential severity of a nuclear winter is the subject of some controversy, but given the current split in expert opinion, it would be premature to rule it out.

As Figure 3 shows, global nuclear arsenals peaked in 1986 at around 64,000. While arsenals are significantly smaller today, each of the US and Russia together still have around 4,000 nuclear weapons each, with 1,400 of these strategically deployed (i.e. on ballistic missiles or at bomber bases).4

Figure 3. Number of nuclear missiles held by the US and Russia 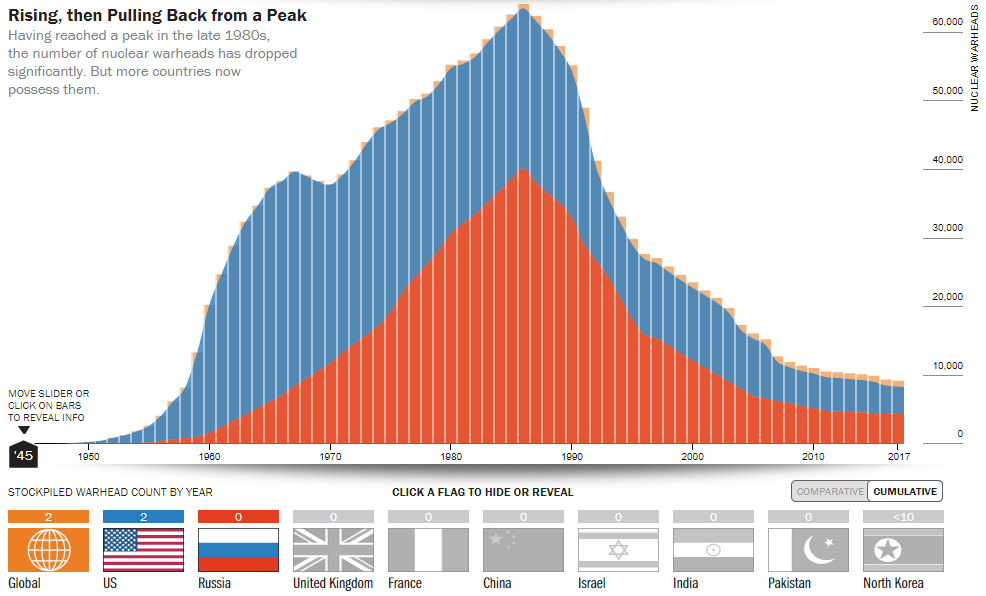 Reducing the risk of nuclear war

There are a number of possible ways to reduce the risk of civilisation-threatening nuclear winter.

Developments in biotechnology promise to bring huge benefits to human health, helping to cure genetic disease and create new medicines. But they also carry major risks. Scientists have already demonstrated the ability to create enhanced pathogens, such as a form of bird flu potentially transmissible between mammals, as well as to create dangerous pathogens from scratch, such as horsepox, a virus similar to smallpox. Figure 4 shows that the cost of gene synthesis has fallen by many orders of magnitude in recent years (note that the y-axis is a logarithmic scale).

At present, the expertise and tacit knowledge required to exploit these improvements to create dangerous catastrophic biological events remain substantial. However, the worry is that as biotechnology capabilities increase and biotechnology becomes more widely accessible, scientists, governments or terrorists might be able, by accident or design, to create viruses or bacteria that could kill hundreds of millions of people. Such weapons would be much harder to control than nuclear weapons because the barriers to acquiring them are likely to be considerably lower.

Reducing the risk of engineered pandemics

Various different approaches can be used to reduce the risk of engineered pathogens.

Developments in artificial intelligence also promise significant benefits, such as helping to automate tasks, improving scientific research, and diagnosing disease. However, they also bring risks. Humanity’s prosperity on the planet is due to our intelligence: we are only slightly more intelligent than chimpanzees, but, as Stuart Armstrong has noted, in this slight advantage lies the difference between planetary dominance and a permanent place on the endangered species list. Most surveyed AI researchers believe that we will develop advanced human-level AI systems at some point in the next 100 years. In creating advanced general AI systems, we would be forfeiting our place as the most intelligent being on the planet, but currently we do not know how to ensure that AI systems are aligned with human interests.

Experience with today’s narrow AI systems has shown that it can be difficult to ensure that the systems do what we want rather than what we specify, that they are reliable across contexts, and that we have meaningful oversight. In narrow domains, such failures are usually trivial, but for a highly competent general AI, especially one that is connected to much of our infrastructure through the internet, the risk of unintended consequences is great. Developing a highly competent general AI could also make one state unassailably powerful, which increases the risk of misuse.

Managing the transition to AI systems that surpass humans at all tasks is likely to be one of humanity’s most important challenges this century, because the outcome could be extremely good or extremely bad for our species.

Reducing the risk from advanced AI

There are several different ways to tackle the risks from advanced AI.

Burning fossil fuels has allowed us to harness huge amounts of energy for industrial production, but also exacerbates the greenhouse effect. On current plans and policy, there is upwards of a 1 in 20 chance of global warming in excess of 6°C. This would make the Earth unrecognisable, causing flooding of major cities, making much of the tropics effectively uninhabitable, and exacerbating drought. Whether climate change is likely to cause a global catastrophe is unclear, and most of the risk seems to be very indirect. Donors interested in learning more about how to tackle climate change should see our Climate Change cause report and our Climate Fund.

For these recommendations, we are grateful to be able to utilise the in-depth expertise of, and background research conducted by, current and former staff at Open Philanthropy, the world’s largest grant-maker on global catastrophic risk. Open Philanthropy identifies high-impact giving opportunities, makes grants, follows the results and publishes its findings. (Disclosure: Open Philanthropy has made several unrelated grants to Founders Pledge.)

We recommend five high-impact funding opportunities for safeguarding the future.

For helpful comments on this report, we are grateful to: