Please note this page was last updated in 2020. While our overall views remain unchanged, some details may be out of date.

Solving climate change is one of humanity’s greatest challenges. However, climate change is only part of the problem; it is one of three intertwined challenges associated with the way we produce energy today, along with air pollution and energy poverty. The burning of fossil fuels not only causes climate change but also kills millions of people every year via air pollution. Moreover, nearly a billion people lack access to reliable electricity and almost 3 billion rely on biomass (wood, animal dung and crop waste) for cooking, with terrible consequences for health. Thus, the challenge we face is not only to decarbonise energy but also to ensure that people in emerging economies have enough high-quality clean energy to meet their growing needs.

This will be a very difficult political, social and technological challenge: we have to replace all of our fossil fuel infrastructure - the power plants, factories, furnaces, cars, trucks, ships and planes, while energy demand potentially increases by a factor of 2 or more by the end of the century.

In this cause area overview, we outline the triple challenge, discuss our priority solution, and outline our recommendations for donors.

One can mark the dawn of the Industrial Revolution with James Watt’s patent for the steam engine in 1769. Before that point, anthropogenic CO2 emissions had been low for millennia, but after it, there have been more than two centuries of almost unchecked fossil fuel burning.

In the Industrial era, dramatic increases in emissions have come following unprecedented economic growth in the West after the Second World War and after 1980 in emerging economies in Asia. Indeed, in spite of increased awareness of climate change, more than half of the CO2 that has ever been emitted has been emitted in the last 30 years.1 Due to an ever-stronger greenhouse effect, global average temperatures have increased by more than 1 degree Celsius since the Industrial Revolution, far beyond what one would expect due to natural variation.

In the 2015 Paris Agreement, countries agreed to a global goal of limiting warming to 2 degrees, aiming for “well below that”, ideally 1.5 degrees. However, this target is not reflected in binding commitments by countries: pledges made under the Paris Agreement imply warming of at least 2.5 degrees by 2100.2 Worryingly, most countries are not on track to meet their goals under the Paris Agreement and there is no true bindingness in international law. If current policies remain in place, warming will probably exceed 3 degrees. Indeed, there is significant uncertainty about how the climate will respond to emissions, which means there is a substantial tail risk of extreme warming of more than 6 degrees. On current policy, there is around a 1 in 20 chance of more than 6 degrees of eventual warming.3

Under most emissions scenarios, global warming is likely to impose substantial costs on human society as well as the natural world. The costs are unevenly distributed and will fall most severely on the global poor. Sea level is expected to rise by half a metre to a metre by 2100 and continue to rise beyond that, threatening coastal cities and island nations.4 Climate change will disrupt precipitation, drying out dry areas thereby increasing the risk of drought and agricultural disruption. Meanwhile, increasing precipitation in wet areas will increase the risk of flooding.5

In general, the effects of warming are expected to get worse with additional warming, i.e. a warming of 3 degrees is -- in terms of human and ecological consequences -- more than 3 times worse than a world with 1 degree of warming (the status quo). Warming of >6°C would call the habitability of the tropics into question,6 and over the course of millennia would lead to multi-metre sea level rise.7 These changes could in turn destabilise the global political order.

Air pollution is one of the world’s biggest public health problems, killing 5 million people each year - nearly 9% of all global deaths.8 Low-carbon energy sources, such as solar, wind and nuclear are a win-win, as they lead to many fewer deaths from air pollution and accidents than biomass and fossil fuels:

Figure 3. The safest sources of energy 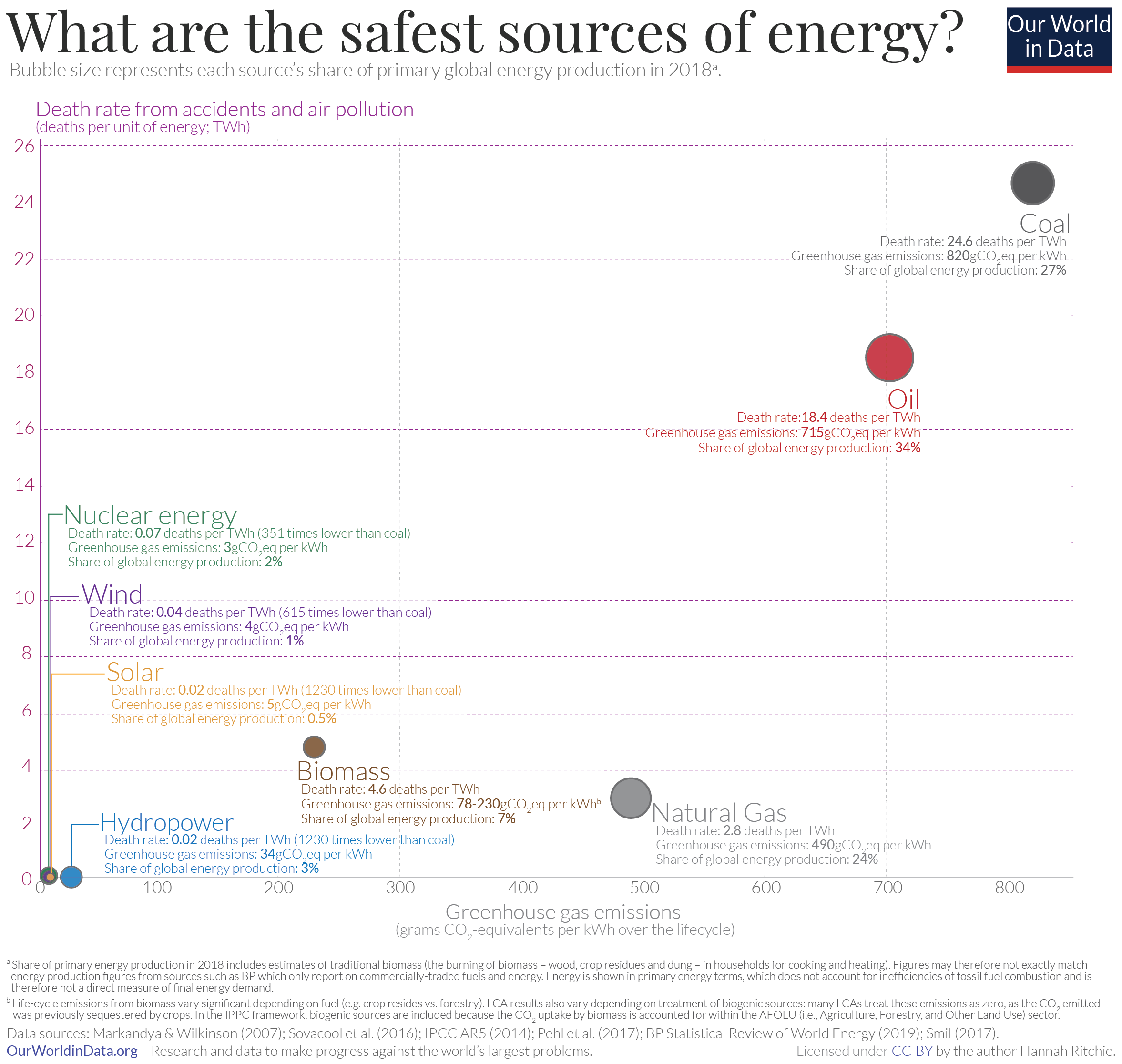 Source: Our World in Data, Energy

Thus, decarbonising energy would all but solve outdoor air pollution. Declining indoor air pollution is the consequence of economic development: historically, as people have become richer, they have moved away from biomass toward more energy-dense fossil fuels. Thus, the challenge we face is to break the historical pattern and ensure that poorer countries can economically develop without relying on fossil fuels.

Energy consumption and human development are tightly connected. The Human Development Index (HDI) is a measure of human welfare that includes income, health and education:

Figure 4. The link between human development and energy consumption 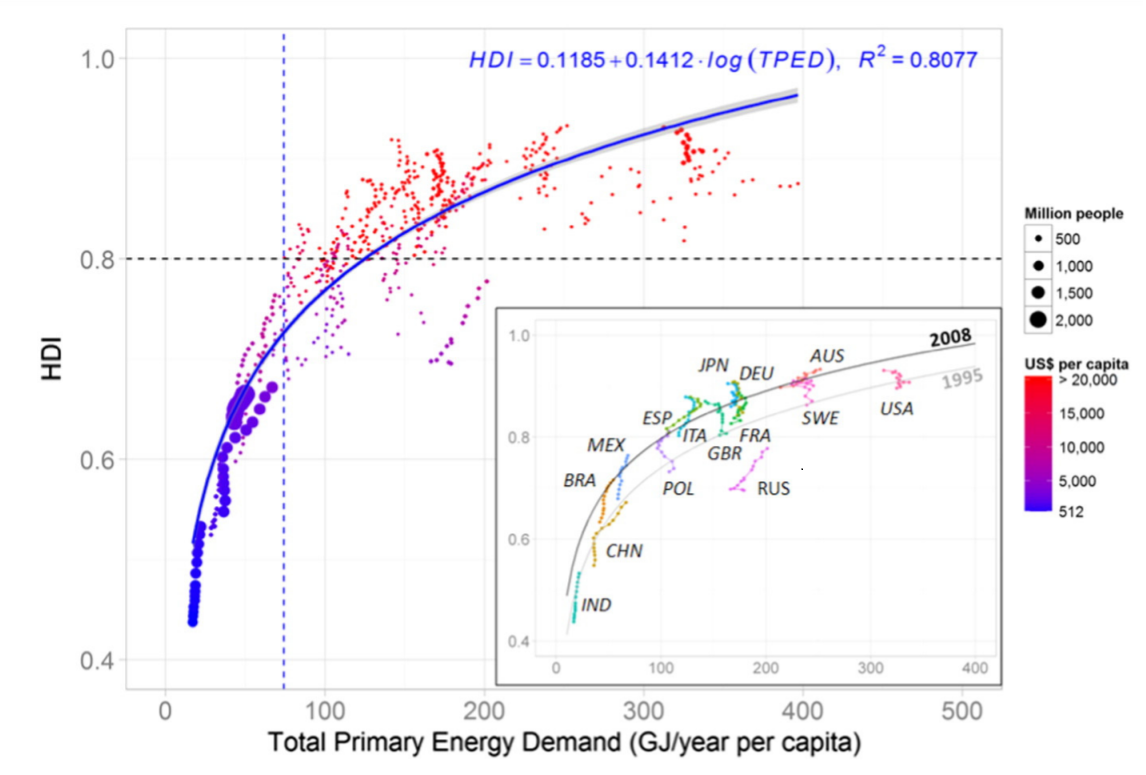 The chart above is rich with information, but we touch on only two points here:

Given the link between human development and energy consumption, there are pragmatic and humanitarian reasons to plan for a world in which energy consumption in emerging economies increases dramatically in the future. Pathways to decarbonisation need to be robust to this possibility.

In spite of the attention paid to climate change over the last 30 years, progress on energy decarbonisation has been poor, with the share of low-carbon energy barely increasing:

Looking to the future, as discussed above, we will have to decarbonise energy in the context of rapidly rising energy demand. Consider these facts:

The UN estimates that there will likely be 11 billion people in 2100.12 Suppose that by that point, each person will consume the same amount of energy as the average Bulgarian today (about half the current high-income country average). In that case, global energy demand in 2100 will be 310,000 terawatt-hours (TWh) per year, compared to about 160,000 TWh per year today - nearly a doubling. Thus, our energy decarbonisation challenge plausibly looks like this: 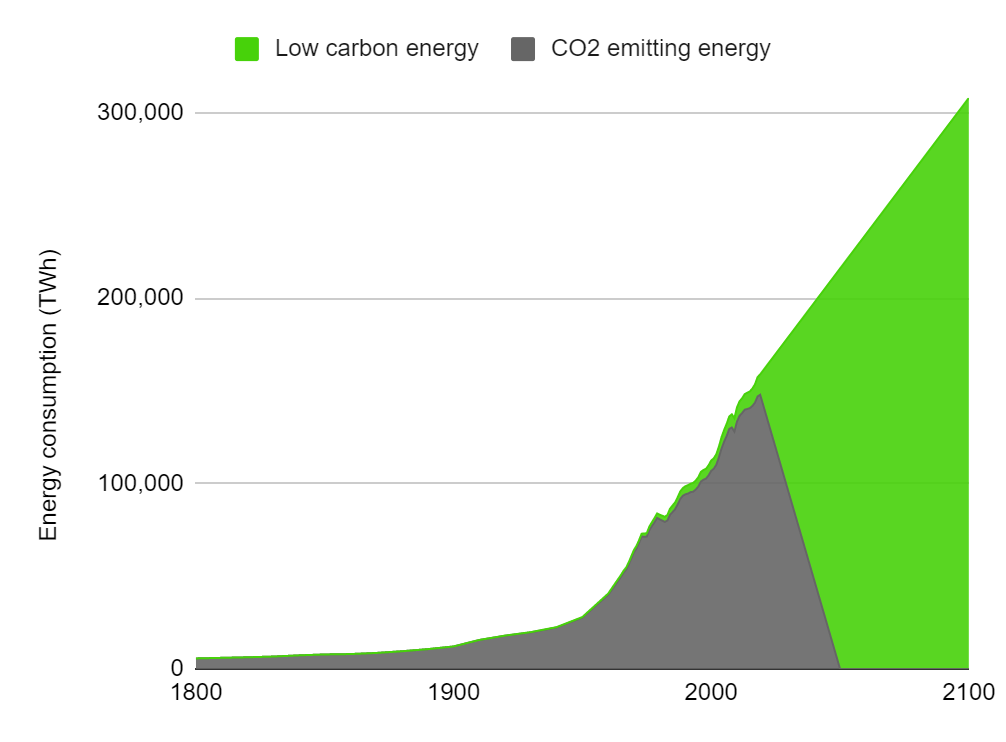 This is an extremely difficult challenge. If we were to build one of the largest nuclear plants ever built every week, week in week out, it would take 20 years to replace the current stock of coal-fired power stations.13 That is before replacing all of the oil and gas, the furnaces and the ships, and before accounting for all the additional energy demand that is to come in the next 80 years.

Over the last four years, we have assessed more than a dozen different possible approaches to climate change, and have concluded that the highest-impact approach philanthropists can take is to support (i) advocacy for (ii) innovation in (iii) neglected low-carbon technology. In a nutshell, the reasons for this are:

Over the next 30 years, most of the growth in future energy demand is projected to come from outside Europe and North America.

As a philanthropist, one can affect the carbon intensity of energy in multiple ways -- by seeking to strengthen climate policy targets (national plans under the Paris Agreement), by providing or advocating for the provision of climate finance to incentivise low-carbon development in emerging economies, and by driving down the cost of low carbon technologies through innovation policy.

Because energy innovation is comparatively neglected and has global leverage by making low-carbon technology cheaper and more efficient, we believe it to be the most effective strategy. For example, in the early 2000s, Germany decided to subsidise the deployment of solar at a huge scale. This helped to reduce German emissions somewhat, but - much more significantly - also drove down the costs of solar for the whole world,14 which will likely have much greater effects on the climate. This shows leverage in action, a strategy that needs repeating for other technologies.

It is widely agreed in the academic literature that, because climate change is such a huge challenge, to solve it we need to make use of all of the low-carbon tools at our disposal, including solar, wind, hydro, energy storage, electric vehicles, nuclear, carbon capture, biofuels, geothermal, carbon removal / negative emissions technology and zero-carbon fuels.15 However, certain key solutions currently receive much more attention than others from philanthropists, governments and the private sector.

Figure 8. The scale (plausible contribution to emissions reduction up to 2050) and neglectedness of different climate solutions 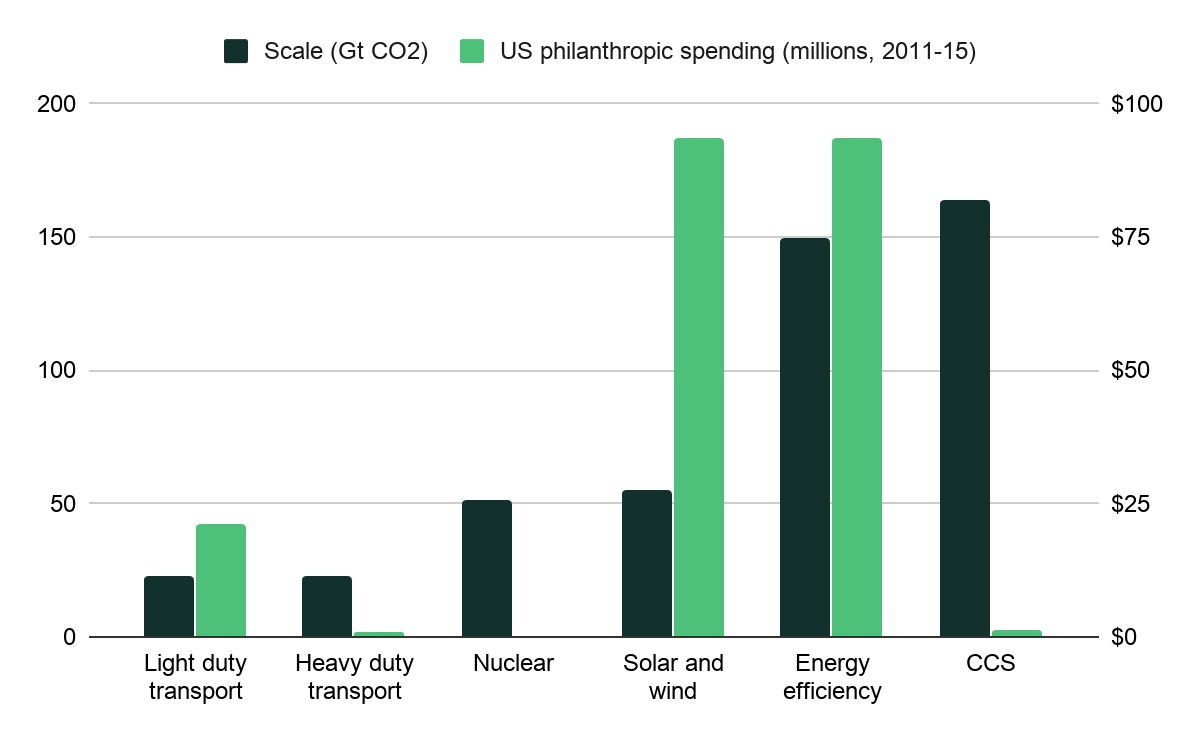 As this chart shows, philanthropic attention has overwhelmingly focused on solar, wind, energy efficiency and electric cars. This philanthropic support has been a major success story, with supportive policy helping to drive cost and performance improvement. However, other key technologies, including carbon capture and storage (CCS), nuclear, and heavy-duty transport (planes, ships, trucks and so on) are similarly important but receive very little attention from philanthropists. As we might expect, the attention these technologies have received is correlated with their progress: 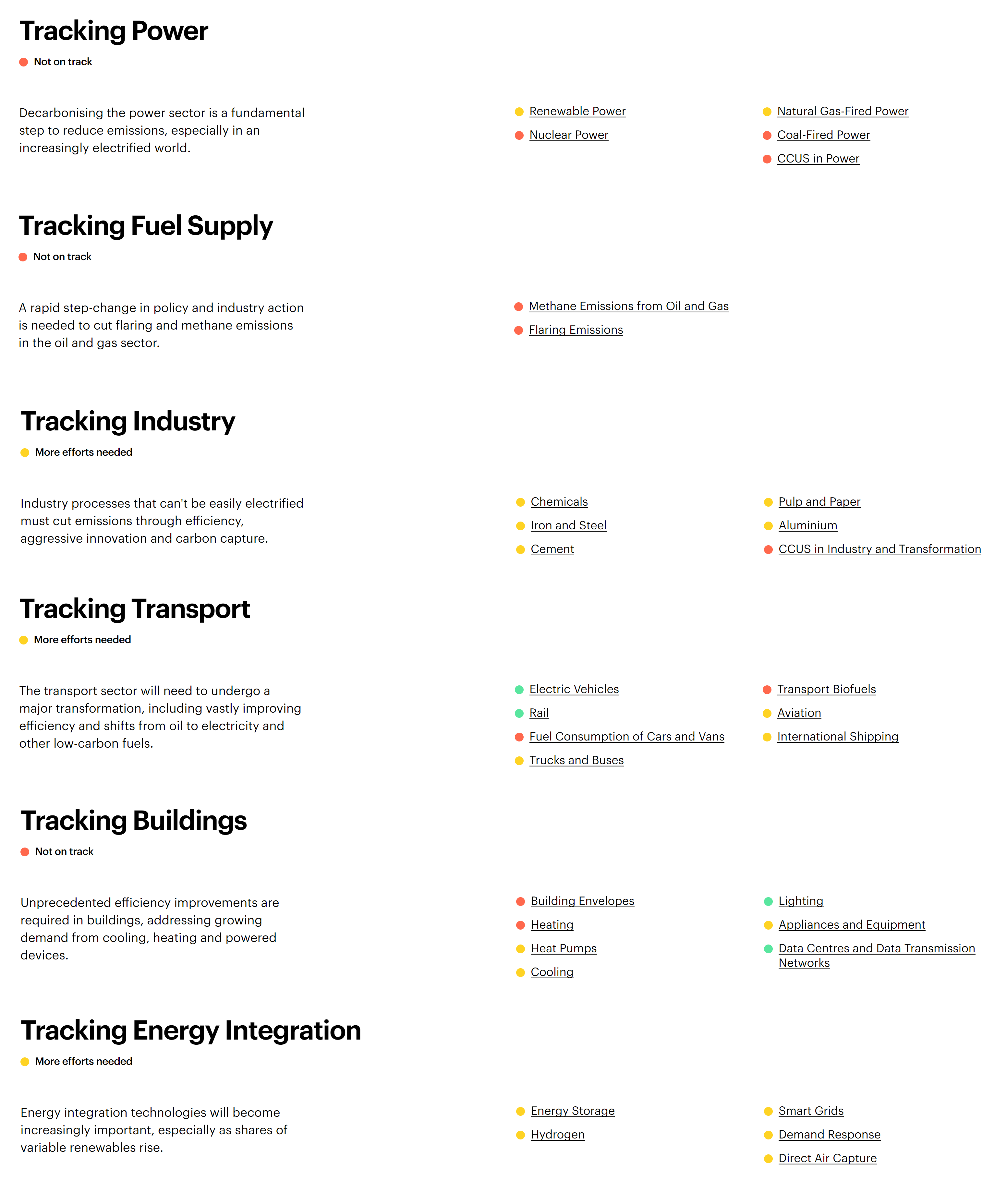 Our top recommendation for donors focused on climate change is to contribute to the Founders Pledge Climate Fund, which will support the highest-impact funding opportunities in this space. Our Fund strategy is distilled in our ABCs of high-impact climate philanthropy:

The A stands for audacious advocacy. We fund organisations that are thought leaders and advocates influencing both the wider climate conversation and how government and private budgets on climate are being spent. This means your dollars can go much much further than through funding projects reducing emissions directly.

The B stands for blindspots and bottlenecks. We fund organisations that focus on the overlooked but critically required pieces of the climate puzzle. Because we will need all of those solutions and because they receive far less attention than some of the more popular solutions, this is another reason for increased impact. Because many solutions are overlooked without good reason, making blindspots visible and fixing bottlenecks is hugely impactful.

The C stands for coordination and for co-funding. Coming together and co-funding through the Fund provides another impact multiplier through greater certainty for charities, larger overall sums, and the ability to react to time-sensitive opportunities.

Our Fund Managers generate a long-list of funding opportunities by talking to other philanthropists and experts and through internet searches. We filter these funding opportunities down using the criteria laid out in Our Approach to Charity document. Thus far, from a long-list of more than 20 climate charities, we have evaluated a shortlist of 12 charities in-depth, by collecting information from the charities themselves and assessing their track record, organisational strength and future projects.

The Fund Managers will consider the following organisations, among other timely opportunities, in their regular grant allocation sessions:

Our 2018 Climate Change report can be found here. We will publish a comprehensive updated report in 2021.

We are grateful to the people who have provided advice and feedback on this research, including:

See the Our World in Data entry on Population Growth. ↩

Oliver Morton, The Planet Remade: How Geoengineering Could Change the World (London: Granta, 2015), 9.  ↩

The estimates of the scale of the contribution by different energy technologies are somewhat rough, but are likely not out by more than an order of magnitude.