Photo by Kelly Sikkema on Unsplash.

This fall we're celebrating the two year anniversary of the Founders Pledge Climate Change Fund. To date, the fund has allocated more than $10M USD to high-impact climate interventions. Our team is committed to finding the best available giving opportunities in the climate space and filling the most urgent funding needs. This is why, once we’ve made all of our planned grants for 2022, there will be no money remaining in the Fund. Moving forward, we hope to raise much more capital and, as in the past, spend it rapidly on the most effective climate solutions.

This post will give a high-level overview of how this money has been hard at work (i) accelerating innovation in neglected technologies, (ii) avoiding carbon lock-in in emerging economies, (iii) promoting policy leadership and paradigm shaping, and (iv) catalytically growing organizations during the past two years.

We start by laying out our basic “meta” theory of change and why we created the Climate Fund in the first place, before discussing some of the recent successes as well as future plans.

Part I: The Why

How to have an impact on climate

In a well-funded space such as climate, with philanthropic giving on the order of USD 10 billion per year and societal spending around 100x that at about USD 1 trillion per year, it is not easy to have a meaningful impact as an individual donor.

Indeed, a natural question for any individual might be – “how can my contribution matter?” – when several of the world’s richest people, such as Jeff Bezos and Bill Gates, are major climate philanthropists.

The visual below illustrates this challenge, comparing the Climate Fund at business as usual in 2023 to climate philanthropy at large (about 1000x larger) and societal response (100x larger still): 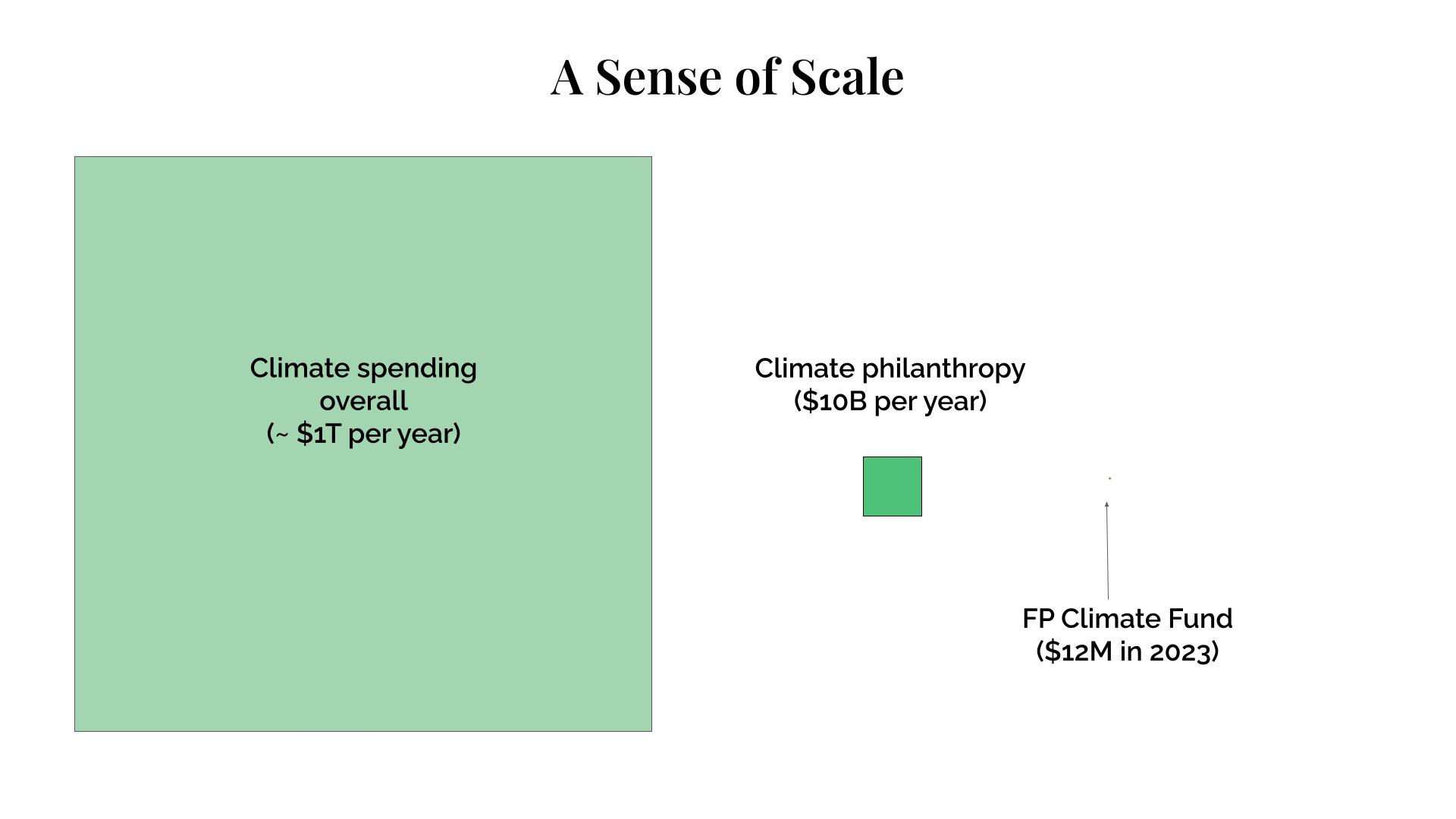 Given the size of existing funding as well as predictable biases in climate philanthropy and our societal climate response, we believe it is overwhelmingly likely that impact-maximizing action for individual donors coming into climate lies in correcting the existing biases of the larger pool of overall climate philanthropy, to fill blindspots and leverage existing attention on climate more effectively. You can read, listen, or watch more about this in the linked materials.

Of course, until now we have not yet answered the question “why should this happen through a Fund?”.

There are several reasons to expect higher impact from a fund than from individual giving:

For these reasons, and more here, we generally recommend donating to the Fund rather than specific charities as the highest impact opportunity for individual donors. Doing so is also easier for donors given the Fund can be donated to by everyone from everywhere (e.g. via Giving What We Can or every.org, or our member app for those with a Founders Pledge Donor Advised Fund (DAF)).

In the two years since its inception, the Climate Fund has moved from a nice idea to a vehicle of real world change, and we're now able to report initial results.

In the figure below, you can see that the funding trajectory of CATF from 2005 until 2018 was fairly static (blue line), and that the public highlighting and grantmaking by Founders Pledge corresponds to a large and sudden increase in annual revenues and a clear trajectory change. Of course, around 2018, many other things changed, such as a general increase in climate philanthropy and attention, so one should be careful to fully attribute this change to our work. For this reason, we constructed four counterfactual scenarios to explain how CATF might have grown without our support, based on the observed change in the growth patterns of similar organizations as well as an optimistic extrapolation of existing growth trends. We display the most optimistic and most pessimistic of these counterfactuals in the figure below, showing that the trajectory change is far beyond what one would expect simply on the general growth of climate organizations at the time (i.e. suggesting that our work therefore did play a significant role therein).

It is this kind of data that led us to explicitly double down on investing in earlier-stage organizations, and we are now seeing similar, albeit earlier, results with our initial grants to TerraPraxis (TP) (starting in 2020) and Future Cleantech Architects (FCA) (in 2021). (We also see similar results with our grantee Carbon180, however we take considerably less credit here given the recent general growth in attention to carbon removal, which is their area of focus.) 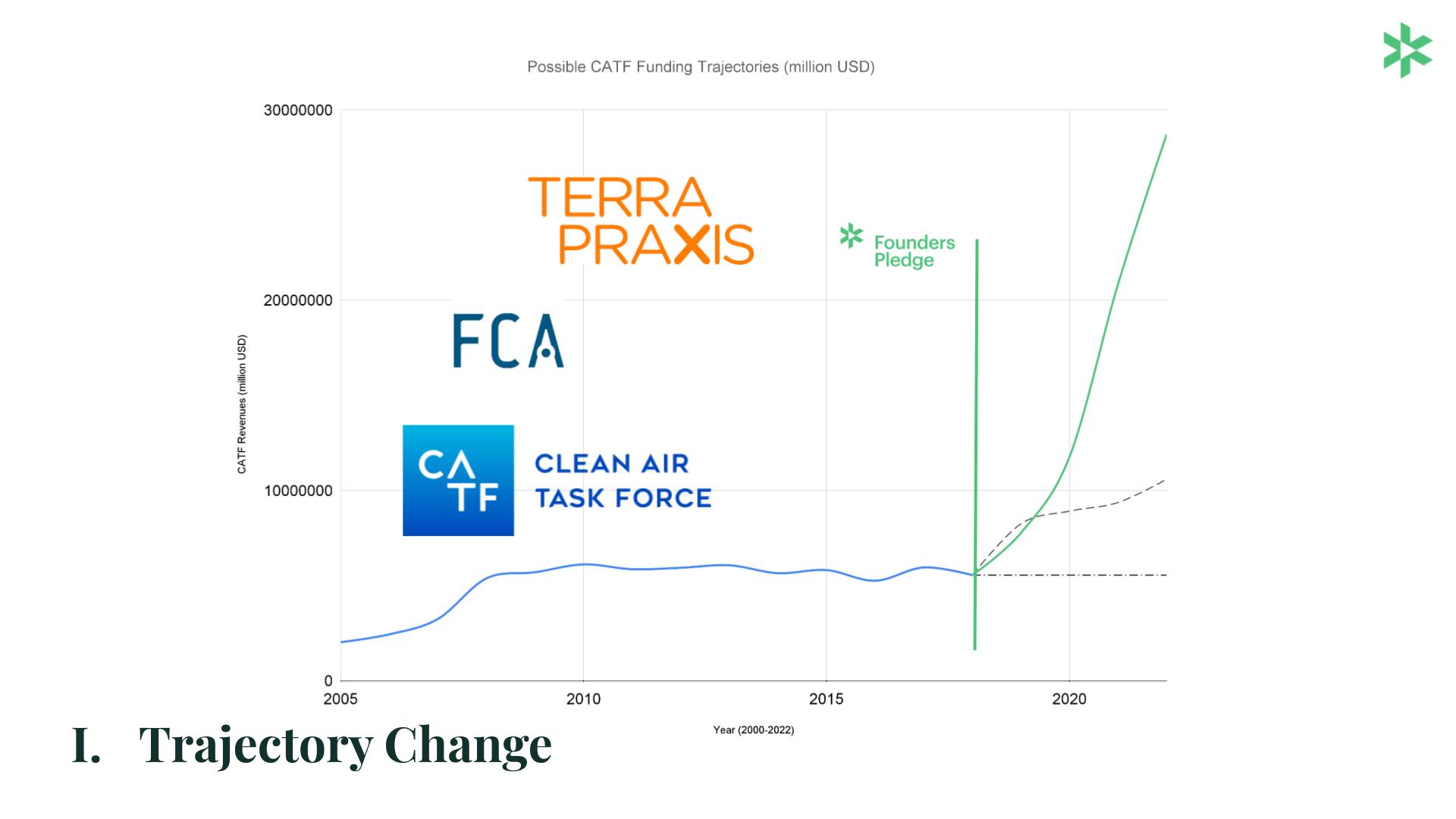 As much as we like our grantees, growing organizations is – of course – not a goal in itself but rather part of a strategy to increase the positive impact we can have on the world, which is what we turn to next.

Alongside our acceleration of promising organizations, we've also witnessed the enacting of all sorts of direct positive change.

Our grantees have reported – many live from COP27 in Egypt – the impact that Founders Pledge grantmaking has had on their organizations and, in turn, on their ability to enact change in the world. We let them speak for themselves:

Our initial grantmaking from the Climate Fund focused on innovation advocacy aimed at accelerating global decarbonization through inducing technological change, and was necessarily located primarily in the Organization for Economic Cooperation and Development (OECD) economies home to the large majority of energy innovation capacity.

When our 2022 grantmaking is finished, the distribution will likely look as below: significant investments not only in the US, but – crucially – also in China, India, and Southeast Asia; as well as smaller investments in Europe, the Middle East, and Sub-Saharan Africa, with ⅔ of our 2022 grantmaking focused on emerging economies compared to about ⅕ before 2022. 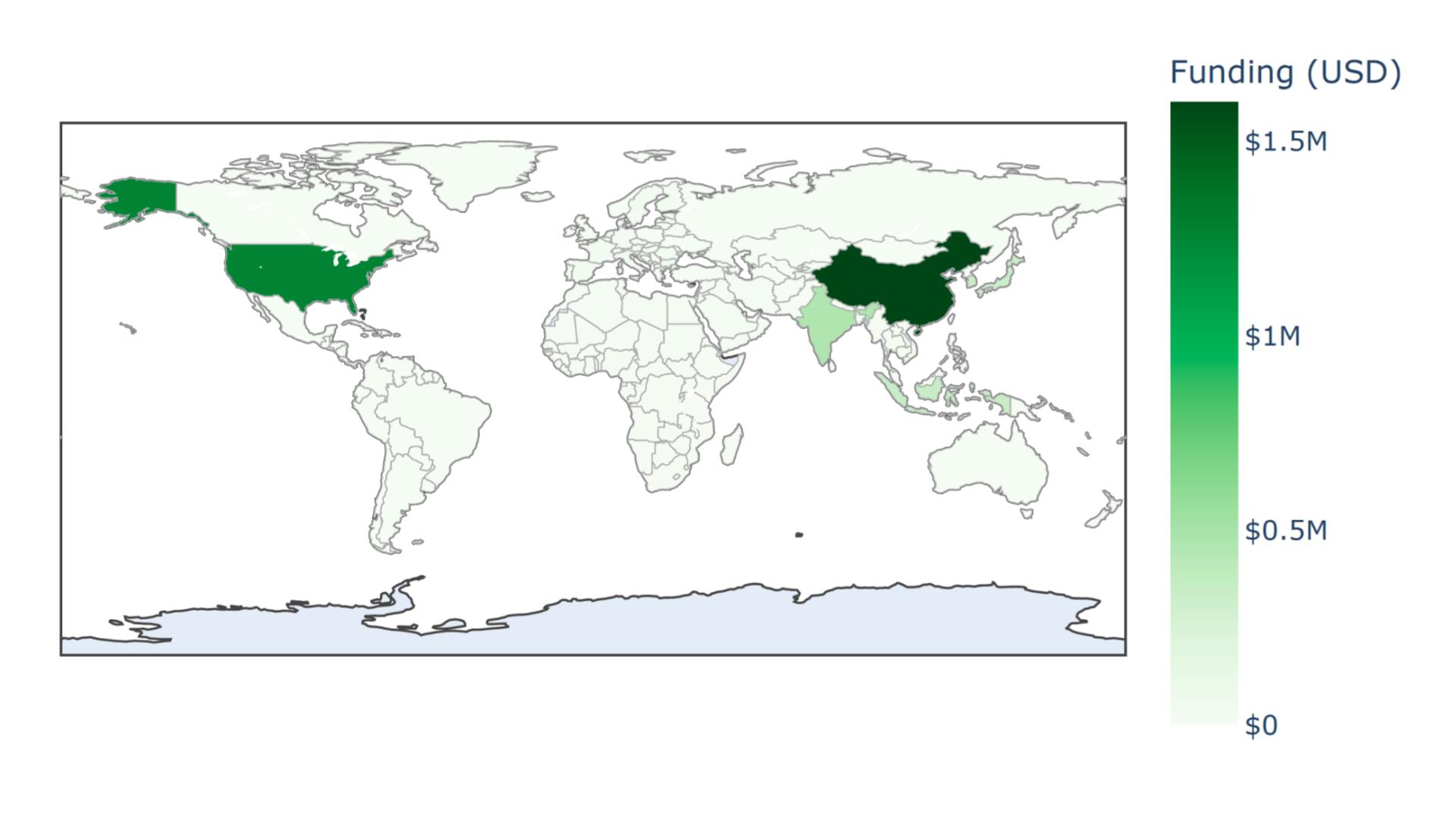 To continue making high-impact grants, we need to continually re-examine the global and country-specific climate action and philanthropy landscape, to enable us to adapt to changes as opportunities shift, often in unpredictable ways. We now discuss two specific changes which we will analyze in more detail as we believe they meaningfully affect our future grantmaking.

Shortly after the Climate Fund's inception, we estimated there was a unique window of policy opportunity after Biden's victory in the US and, putting our money where our mouth was, made large grants from the Climate Fund in response (see discussion above). With major climate policy having been passed in the form of the Bipartisan Infrastructure Bill, the CHIPS and Science Act, and the Inflation Reduction Act, and the midterms having ended the Democratic trifecta, it is now time for an updated analysis on future innovation advocacy priorities. As an upcoming companion blog post will illustrate, the US energy innovation effort is now in a much better place than it has been for many decades.

Upcoming research will re-evaluate climate action in the context of these changes, comparing further US engagement – is there now vast leverage with improved policy effort or are we hitting diminishing returns? – to alternatives, such as increased engagement on either European innovation work (like our 2021 grant to FCA) or on pushing the lever on global cooperation in the cleantech transition (as with our 2022 grant to help promote the Breakthrough Agenda report).

The Russian invasion of Ukraine has not only exerted a tremendous humanitarian and geopolitical toll, but has also fundamentally reshaped the world of energy and climate action.

Two contradictory and yet equally plausible trajectories have emerged from this crisis, and it is quite unclear which one will dominate – (1) a doubling down on decarbonization as energy security and climate align or (2) a derailing of global cooperation and an increased lock-in to domestic fossil fuels. We have done some initial exploration of this question here – arguing that in a more uncertain climate future, downside risks dominate – and will further examine what this means for both long-term grantmaking and taking advantage of opening policy windows (such as a new appreciation of nuclear power) in the short-term.

With your support, we will continue to execute a research-based grantmaking program aimed at finding and funding the highest impact opportunities in climate. With a track record of two years and first successes materializing in the world, we hope to have demonstrated an ability to make high-impact bets that can affect change far beyond what the modest amounts suggest, by leveraging larger philanthropic and policy budgets to help correct some of the systematic blind spots in our societal climate response.

She has previously lived for half a year each in Colombia and India. Now she is studying physics at the Humboldt University of Berlin.

She has been involved in the climate space for the last eight years and has been working with different youth organisations, politicians and decision-makers. She is part of the effective altruism community.

If she is not working she is probably dancing around in her room.

Violet moved to Switzerland to pursue a masters in Climate Science and Economics at the University of Bern, and holds a bachelors in Physical Geography from UC Berkeley.

Violet grew up in Berkeley, CA. She is classically trained in ballet and uses her free time for baking or long distance thru-hikes like the Nüümü Poyo.