While most of the world went into lockdown in response to the COVID-19 pandemic, Sweden encouraged its citizens to practise social distancing on a voluntary basis, with few strict measures in place. Many countries are aiming to suppress the virus through a strict lockdown before gradually reopening and implementing a test-and-trace strategy to keep it under control. Sweden’s strategy for managing the COVID-19 pandemic differs massively from this popular approach.


Some measures are in place: the government has banned gatherings of more than 50 people and universities and schools for over-16s have closed. However, primary and secondary schools, shops, restaurants and factories are open. The hope is that the number of infections can be kept low enough to avoid overloading hospitals. It’s a risky strategy, but is it paying off?

The situation in Sweden 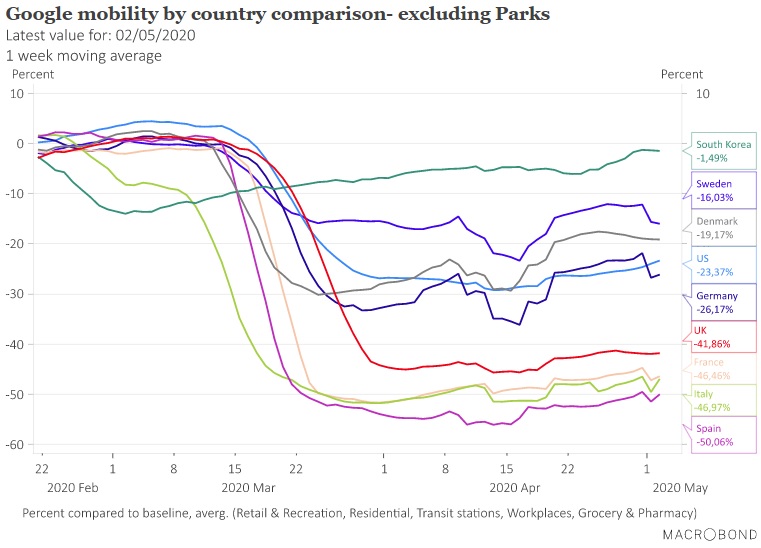 Denmark’s mobility was down 19% but the UK, France, Italy and Spain’s mobility were all down more than 40%. Note that in late March, as the pandemic was emerging in Sweden and Denmark, the difference was even greater: while Sweden’s mobility had decreased by about 15%, Denmark’s had dropped by 30%.

Sweden has had far more COVID-19 deaths than its neighbours

Cross-country comparisons are notoriously hard to make and have to be handled with care. Many variables affect how a country fares during the pandemic, and they’re extremely difficult to disentangle. Moreover, measures which are effective in one country might not work well elsewhere, so we should be very careful when applying lessons from one context to another.

To mitigate these difficulties to some extent, we can compare countries that are similar in many relevant respects. Comparing the number of confirmed COVID-19 deaths per million people in Sweden to deaths in neighbouring Denmark, Finland and Norway paints a disturbing picture.

There are two key observations to draw from this chart. Firstly, deaths per million people in Sweden are many times greater than in Denmark, Finland and Norway. This is evidence that Sweden’s strategy is leading to far more COVID-19 deaths to date than there would have been had Sweden enforced a strict, early lockdown. Secondly, the slope of Sweden’s curve is declining much more slowly than its neighbours, which are now almost flat. This means that the extra deaths in Sweden compared to its neighbours will likely continue to grow for some time.

There are many possible reasons that could contribute to Sweden doing relatively well compared to some of its European neighbours but it is impossible to unravel all of the causes and effects at play. Differences in age, the rate of obesity, the proportion of single-person households, and the number of international tourists might affect the number of infections and deaths.

What is Sweden aiming for?

Most countries are aiming to reduce the number of cases by enforcing strict lockdowns until a test-and-trace strategy is feasible. A successful test-and-trace strategy enables a country to gradually emerge from lockdown while keeping the virus under control. Following a strategy like this, the number of deaths to date is a useful measure of performance. Other aims a government might have include trying to achieve herd immunity and keeping the number of infections low to spread out demand for healthcare.

While there are probably far more deaths to date in Sweden than there would have been had Sweden followed a strategy similar to its neighbours, minimising the number of deaths to date plausibly isn’t Sweden’s goal. As a result, this isn’t necessarily a good measure of Sweden’s performance. It’s not entirely clear what Sweden’s aims are, but the country seems to be trying (i) to reduce the total number of deaths throughout the epidemic by protecting the most vulnerable and (ii) to keep the number of infections sufficiently low to avoid overwhelming the health system, all while (iii) causing relatively little disruption. If this can be sustained until herd immunity is reached, then this strategy could be a big win for Sweden.

It is to be expected that Sweden has had more deaths so far than its Nordic neighbours. And the extent to which there have been more deaths in Sweden is important and worth noting, but to evaluate Sweden’s strategy properly, we must also consider how Sweden is faring in terms of its other aims.

Contrary to predictions that without strict lockdown measures, health systems would be massively overloaded by COVID-19 patients, hospitals in Sweden have excess capacity, with emergency care facilities remaining mostly unused.

It’s not all good news, though. Imperative to a strategy like Sweden’s is protecting those who are most likely to die. As COVID-19 is deadliest to the elderly, many countries are seeing horrific deaths in care and nursing homes and Sweden is no exception. Up to May 14, almost half of Sweden’s COVID-19 deaths were residents of care homes. Regardless of how Sweden is faring overall, one thing is clear: Sweden has failed in protecting the vulnerable.

When a large proportion of the population is susceptible to the virus, it can spread very quickly. But once a large enough proportion of the population is immune to the virus, the rate of infection drops off and the virus gradually dies out. This is called ‘herd immunity’. If herd immunity is achieved and the immunity lasts, then the need for physical distancing will be over and people can get on with their lives.

There isn’t a consensus on the proportion of the Swedish population that has been infected. An antibody study found that by late April, 7.3% of people in Stockholm had antibodies. However, this is just one study, so we shouldn’t rely on it too heavily. There’s still considerable uncertainty about the true prevalence of antibodies in Stockholm, and Sweden more broadly. Confirmed COVID-19 deaths across the country have almost doubled since late April, so the number of people with antibodies could now be much higher.

There’s evidence that 80% of infections stem from around just 10% of infectious individuals. Once this variation is accounted for, the herd immunity threshold looks like it might be significantly lower, perhaps as low as 24%. This is because the most susceptible and infectious individuals are likely to be infected relatively early on in the epidemic, and as the virus passes through the population, it runs out of highly susceptible and infectious hosts. If the herd immunity threshold really is this low, Stockholm could be close to achieving herd immunity, and the rest of Sweden might not be far behind. It’s premature to put too much faith in this model and the precise numbers it gives us until we have more data, but it offers an intriguing and compelling case that the herd immunity threshold is lower than originally thought.

What can we learn from this?

If the aim is to minimise COVID-19 deaths, strict, early lockdown is sensible. Striving for herd immunity is a risky strategy with significant losses. It might not even be feasible at all if immunity from the virus subsides after just a few months. Until we know more, it would be foolish to follow in Sweden’s footsteps.

There are conditions in which Sweden’s strategy could pay off but the chance seems fairly low. If test-and-trace strategies prove too logistically challenging to pull off, then the only other viable alternative besides a strategy like Sweden’s is enforcing intermittent lockdowns until an effective vaccine is made and distributed. If that’s the case and the herd immunity threshold is relatively low, and individual immunity lasts long enough for Sweden to reach and sustain herd immunity, then Sweden might be able to return to something resembling “normal life” sooner than those following an intermittent lockdown strategy. Additionally, if it becomes unsustainable to enforce intermittent lockdowns, then other countries might be forced to follow a strategy like Sweden’s. In that case, such countries’ enforced lockdowns will have merely delayed the inevitable, but they won’t have saved many lives and they will have been very costly. So Sweden’s COVID-19 strategy could pay off, but that pay off is conditional on fairly remote scenarios coming about.

Does this mean that strict lockdown is the best strategy? Not necessarily. We’ve just looked at the direct effects of different strategies on COVID-19 deaths. There are other factors, such as mental health, loneliness, suicide, domestic violence and unemployment, which would improve with looser restrictions. To make a fully informed decision, we need to make difficult trade-offs between deaths and other important factors like these in a wellbeing analysis.

Aidan joined the research team at Founders Pledge in August 2019. Prior to working at Founders Pledge, he studied at the University of Oxford. He graduated with a First Class MMathPhil in Mathematics and Philosophy, specialising in formal epistemology, decision theory and ethics.