As COVID-19 tore through China, Iran, Italy and Spain, killing thousands of people and overwhelming health systems, governments across the world took the extraordinary step of imposing lockdowns, which remain in place in many countries today:

The lockdown has created huge economic costs, with unemployment in the US now the highest it has been since World War 2. This has led many people to ask - at what point do the economic costs of the lockdown stop being worth it? When does the cure become worse than the disease? To answer this, we need some way to compare health costs with economic costs.

Some people find such comparisons distasteful, arguing that we should never let people die merely for the sake of the economy. Views such as these effectively give saving lives infinite weight, but this leads to counterintuitive conclusions. For example, in our day-to-day lives, we all impose small risks of death on others through mundane tasks such as driving. But if death has infinite weight, then driving must always be wrong. Moreover, it is important to recognise that “the economy” is not an inanimate thing, but something that has important effects on people’s wellbeing, for example by providing employment prospects and income.

How, then, can we resolve the awful trade-off between lives and the economy?

What is your life worth, statistically?

One popular approach in economics is to try to convert all the costs and benefits into money. When doing this for lives, we can use what is known as the Value of a Statistical Life. Rather than asking people what they would pay to avoid certain death (presumably infinite), we ask them how much money they would accept in exchange for an increase in risk of death. Suppose someone is willing to take an extra $1,000 for an additional 1-in-10,000 risk of death by working as an ice road trucker. If 10,000 truckers are each paid to take on that added 1-in-10,000 risk, then the “expected” number of deaths (expected in a probabilistic sense, that is, the probability of death multiplied by the number at risk) is 1. So economists multiply that $1,000 by 10,000 workers to get the “Value of a Statistical Life.” The result: $10 million. This, the argument goes, is what the US government should be willing to pay to save a life.

Although popular, the Value of a Statistical Life is subject to numerous problems.

Firstly, the Value of a Statistical Life implies that whether governments happen to know who will be killed by a policy makes a vast difference to the costs and benefits of that policy. Suppose a government is faced with two options:

A. Introduce a pollution regulation that produces $10 billion in economic benefits but with certainty will kill 100,001 people, but we don’t know who they are.

B. Introduce a pollution regulation that produces $10 billion in economic benefits, but will definitely kill one person - Brian.

Since Brian’s willingness to pay to avoid death is infinite, the Value of a Statistical Life implies that A is better than B, even though it kills 100,000 more people, which is clearly wrong. One way to avoid this is to say that only risk of death, rather than death itself, is valuable, but this is the opposite of the truth.

Secondly, there is lots of evidence that people are poor at thinking about small probabilities. Many-fold decreases in the chance of harm do not produce proportionate decreases in people’s willingness to pay to avoid it. It is, therefore, not clear why we should let these judgements determine governments’ life-and-death decisions. Moreover, the values produced by this method are highly sensitive to people’s wealth and to the options they have to choose from. Charles Koch’s willingness to pay for personal safety is much higher than a 25-year-old farmer in Ohio, but that doesn’t mean his life is worth more than the farmer’s, it just means he has more money.

In light of these and other methodological issues, it is not surprising that studies using similar methodologies have set the Value of a Statistical Life as low as $100,000 and as high as $76,000,000.

This suggests that the Value of a Statistical life approach is fraught with problems.

WELLBYs recognise that wellbeing is dependent on quality and quantity of life. If someone dies prematurely, then they miss out on the good things in life. Other things equal, it is worse for a 40-year-old to die than an 85-year-old because the 40-year-old will miss out on more of the good things in life. WELLBYs also track quality of life. Fortunately, there is now a voluminous literature on the effects of different life events on wellbeing, such as unemployment, loneliness, divorce and so on. Average wellbeing in the UK is 7.5 on a 0 to 10 scale, and we have lots of data on how external events can push people up or down this scale.

Richard Layard and other economists have put wellbeing analysis to use in their paper 'When to release the lockdown'.

Releasing the lockdown would have various positive effects on wellbeing, including:

On the negative side, releasing the lockdown:

1. Increases the final number of deaths from the virus (as well as from other conditions which may get undertreated if health services become overstretched with COVID-19 patients).
2. Increases road deaths, commuting, CO2 emissions and air pollution.

To see how WELLBYs work, take the example of income. The literature in psychological science suggests that a 1% gain in income increases wellbeing by 0.002 points. Layard et al. argue that if we release the lockdown in July rather than June, income will decline by 5.1% as a percentage of annual income. The effect on wellbeing for each person of this is therefore 5.1*0.002. Spread across the whole UK population of 67 million, this is 663,000 WELLBYs.

Against this, we have to balance the costs to health of releasing the lockdown. Layard et al. argue that each extra month of lockdown saves 35,000 lives from COVID-19. They argue that since COVID-19 disproportionately affects the elderly, each person saved would otherwise live another 6 years on average (at wellbeing level 7.5). So, each extra month of lockdown saves 1.5 million WELLBYs (35,000*6*7.5). Given some probably debatable assumptions, Layard et al. estimate that the net costs and benefits of the lockdown break down as follows:

Net benefits of releasing the UK lockdown on the stated date rather than in May (in WELLBYs, 10k) 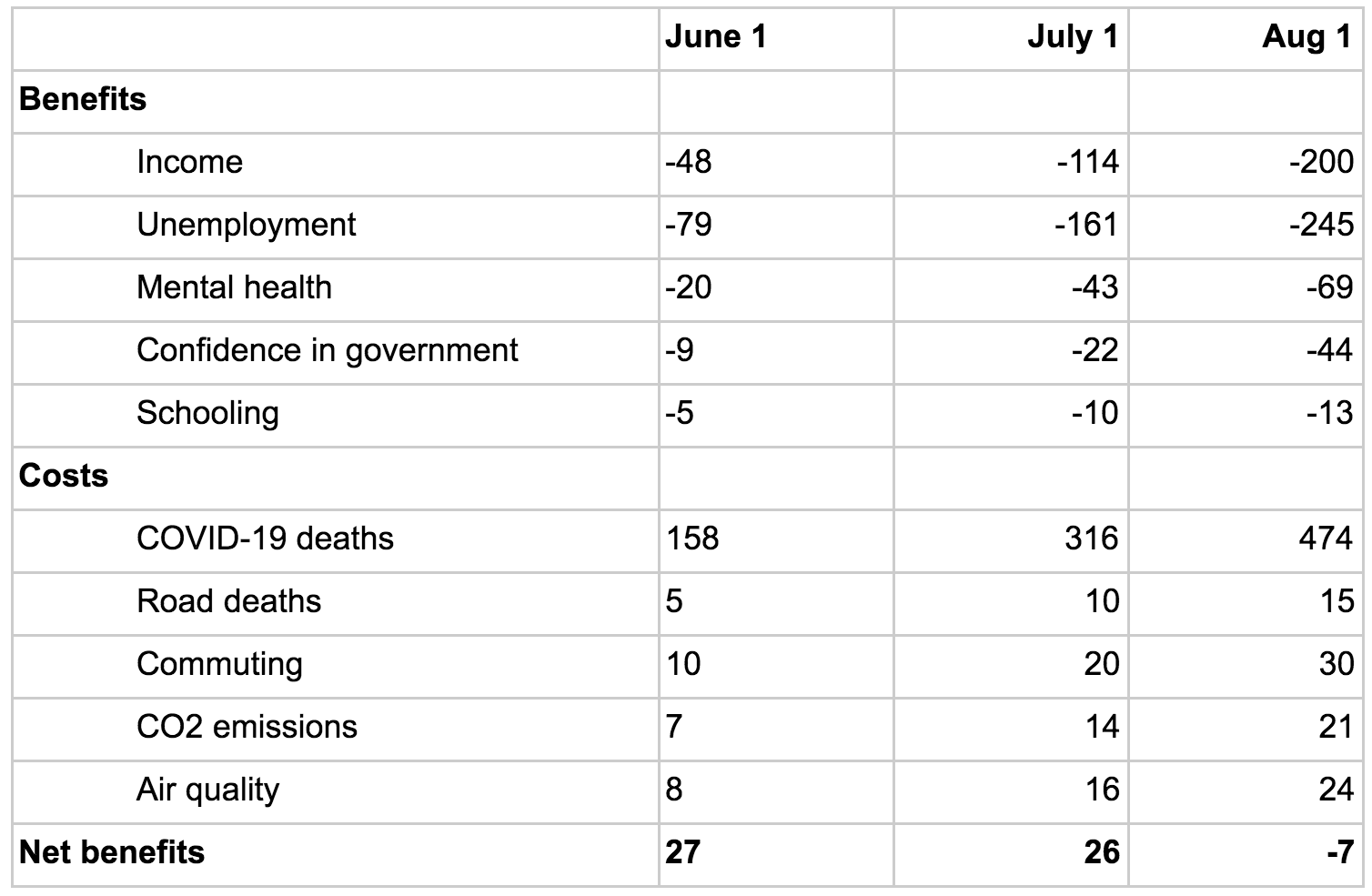 Thus, on Layard et al.’s assumptions, releasing the lockdown in mid-June would be optimal, with the net benefits declining thereafter - releasing in August would actually be worse than releasing now due to the rising economic costs. Layard et al. themselves say that the numbers in the table above are purely illustrative, so we should not take this conclusion literally. Nevertheless, the quantitative framework is an important contribution.

Wellbeing is arguably not all that matters, but almost all ethical viewpoints agree that wellbeing is morally important. The new science of wellbeing analysis should be a key guide for governments making decisions about when to end the lockdown.