We’re excited to announce a new recommended funding opportunity: London YIMBY, a policy advocacy organisation that works to improve housing policies in England. At first glance, this may seem like an odd recommendation. Our high-impact opportunities largely support people living in extreme poverty in low-income countries, campaign for improved welfare standards for the billions of animals in factory farms, or mitigate existential risks to safeguard humanity’s long-term future. How does housing affordability in England compare to these other important yet neglected cause areas?

We think London YIMBY is impactful for three main reasons. First, housing costs in parts of England are among the highest in the world, likely due in part to stringent regulations on development. Second, the effects of high housing costs on quality of life, inequality and access to opportunity are surprisingly large. Third, and most importantly, London YIMBY is a small organisation that has not yet attracted much attention from other funders. This means that donations are likely to help accelerate the organisation’s scale-up.

In the rest of this blog, we’ll dig a little deeper into the case for London YIMBY. For all the details, please see our full research report.

The cause of England’s housing crisis

The cost of housing in the UK, as measured by the ratio of rent to income, has continued to grow over the past 30 years. 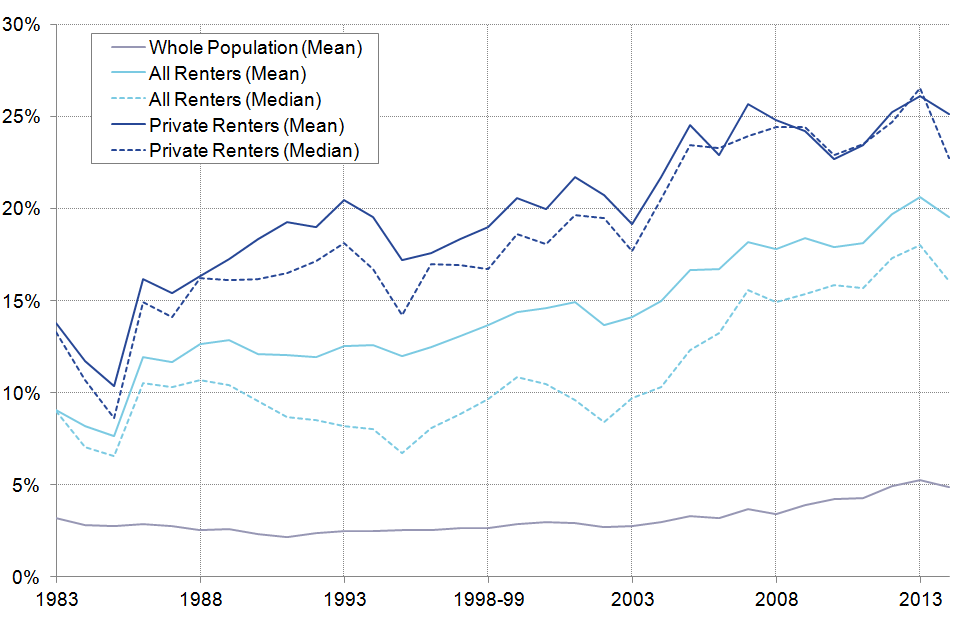 The current level of rent is particularly high in cities like London and throughout the South East, even after accounting for local incomes. Within a region, poorer people also pay a higher proportion of their income in rent.1 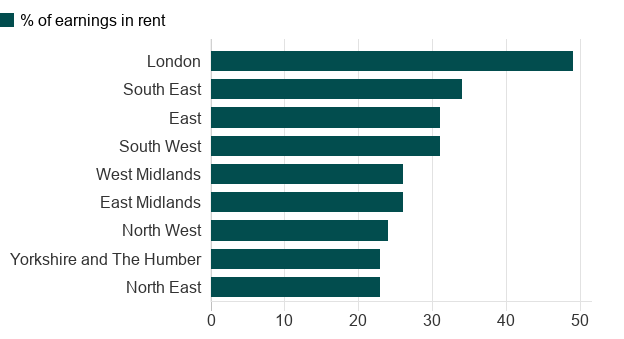 (Source: BBC News, "How much of your salary is spent on rent?")

Why has this happened? The answer is not straightforward because housing markets are influenced by many factors, including population growth, incomes and interest rates. However, the evidence suggests that the supply of housing has been reduced by a restrictive development planning system. For example, receiving permission to build houses on agricultural land increases the land’s value by almost 100 times.2 This indicates that the supply of developable land is constrained. The parts of the UK where housing is most expensive are also the areas where residential projects are more likely to be rejected by local planners.

Average refusal rate of residential projects with more than 10 dwellings, 1979-2009 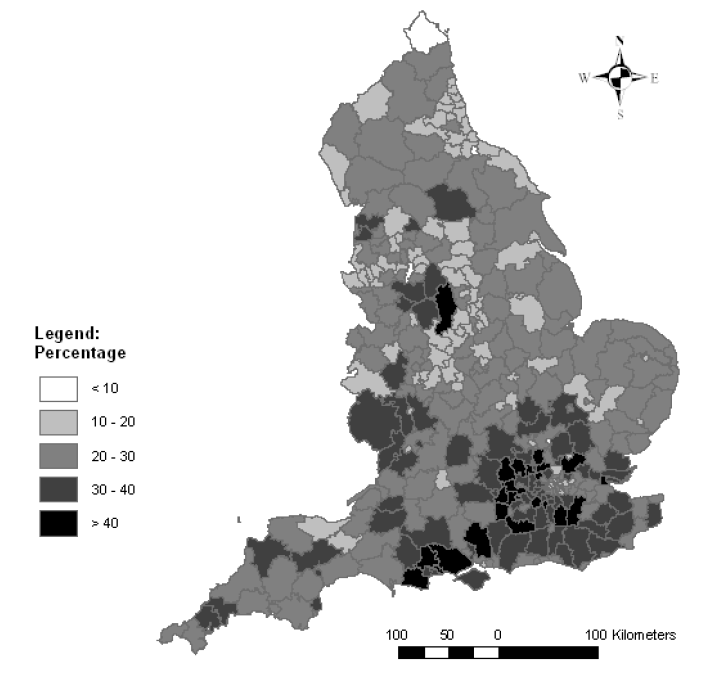 It turns out that regional variation in planning restrictions and housing costs has several important effects on economic growth and inequality. Taken together, these effects indicate that inefficient housing policy is one of England’s biggest economic problems.

The high costs of unaffordable housing

First, and most importantly, high housing costs reduce access to opportunity by keeping people from moving to places with good job opportunities. The places where it is most difficult to build new homes are also the places with the highest-paying jobs. For example, moving to London is associated with a 20 per cent boost to income. If it were easier to build homes, we would expect supply to increase and costs to fall. This would encourage some people who are currently deterred by the high cost of housing to move to more prosperous places.

Because productivity and incomes are much higher in cities like London than in the rest of the country, each additional house built represents a societal gain on the order of £100,000.3 Even a modest increase in the supply of homes could have large economic benefits. As an upper bound, evidence from the US suggests that the net benefits of a more mobile population could be on the order of 1 per cent of GDP, or £20 billion per year.4

Second, high housing costs have negative distributional effects. Poorer people spend a larger proportion of their income on housing. The decades-long increase in real house prices has transferred wealth from young people and renters to older people and long-term homeowners. The median rent also surpasses the traditional affordability threshold of 30 per cent of median income in many parts of England.5 This increases the prevalence of homelessness.

Third, an inefficient construction sector means that older homes are replaced less frequently. As a result, English homes are among the oldest, smallest and least energy efficient in all of Europe.6

Our conclusion is that the most promising way to address the housing crisis is to make it easier to build homes in England.

How to solve the problem

We evaluated several organisations working to improve housing policies in England. We’re choosing to recommend London YIMBY due to the organisation’s focus on overcoming the political economy challenges to housing reform.

For most homeowners, their house is their most valuable asset. Homeowners also comprise a majority of the UK electorate. This has stymied previous reform proposals because politicians are understandably reluctant to introduce measures that might reduce house prices. Recognising this, London YIMBY has focused on advocating for policy reforms that would reduce housing costs in the long-term while providing a short-term benefit for homeowners.

For example, the organisation’s most popular policy proposal is "Better Streets". This policy would devolve the authority to grant planning permission to the level of individual streets. A supermajority of homeowners and residents could vote to “upzone” their street to allow denser construction. Under the current system, land with planning permission is many times more valuable than land without it. Upzoning would therefore increase the value of each plot on the street while expanding the overall supply of homes and reducing average housing costs. This would also make cities denser, which has environmental, economic and social benefits.

We think London YIMBY’s proposals have the potential to meaningfully increase the supply of houses in England. If their policies succeed, they could be replicated in other places. England is hardly the only country where housing affordability is a problem. As an early-stage organisation, London YIMBY is also likely to benefit greatly from marginal donations. The organisation is currently self-financed by its co-founder, entrepreneur John Myers. With more support, Mr. Myers plans to hire research and technical assistance that will tangibly increase his output.

In short, London YIMBY is working to solve an important problem and supporting them at this time seems likely to be unusually impactful. For Founders Pledge members who are interested in supporting organisations working in the UK, this is one of the best opportunities we’ve come across.

(3) Average annual productivity per capita is £15,000 higher in London than the rest of the UK and moving to London is associated with a 20 per cent income gain. See analysis from the Resolution Foundation and Gareth Piggott at London Datastore

(5) While the UK does not define an official affordability limit, a literature review by the Government of Scotland found that other countries and researchers typically set the limit at between 25 to 50 percent of income.

Stephen joined Founders Pledge in 2019. Previously he was a Program Analyst for the United Nations Development Programme in Rwanda. He has also worked on climate change projects with the UN in Panama and the Youth Climate Lab in Canada. Stephen has an M.Sc. from McGill University and a B.Arts.Sci. from McMaster University.