Advice on how to live a climate-friendly lifestyle is typically dominated by adjectives rather than numbers. We might, for example, be told that reusing plastic bags and switching to a plant-based diet have a huge effect on the climate. Such adjectives provide no indication of scale and so do not tell us which of our lifestyle decisions can make the biggest difference. Where numbers are used, they invite a focus on the trivial. For example, the BBC advises us that if phone chargers were unplugged when not in use, “the UK could save enough electricity each year to power 115,000 homes”. 1 Numbers like these provide no indication of scale. In fact, all the energy saved by unplugging your phone charger for a day is used up in one second of car driving. 2 So unplugging your phone charger is worthwhile but is rather like bailing out a sinking ship with a teaspoon.

This illustrates the value of quantitative comparisons and focusing on the big wins. In this post, the first in a two-part series, we discuss some of the most important lifestyle decisions for the climate and how their effect is often poorly estimated because people ignore the effect of climate policy. We recognise that this can sometimes be an emotive subject, and the issues are not always clear cut, so, while we explore them below, we’ve also included a handy checklist at the end.

How much does the typical person emit?

Emissions per person vary considerably even across rich countries: the average American emits 18 tonnes of CO2 per year, whereas the average Swede emits only 7 tonnes. As a guiding rule, if you live in a rich country and live a typical lifestyle, then you probably emit between 5 and 20 tonnes of CO2 each year.

The tiny contributions of every individual add up to a huge global problem. Global average emissions are 5 tonnes of CO2 per year, which, when spread across 7 billion people, means we are putting about 35 billion tonnes of CO2 into the atmosphere every year. Emissions have risen unchecked since the Industrial Revolution, and there is not yet any sign of a major course correction.

Figure 2 below highlights the most important lifestyle decisions for the climate, ignoring the effects of government policy, and ignoring personal donations.

This suggests that decisions about whether to have a child are completely dominant from the point of view of the climate. However, the estimates above assume that the emissions of one's children and grandchildren will continue at a constant rate into the future, which is highly unrealistic because it ignores (1) emissions per head are trending down in most advanced economies, and (2) many jurisdictions have legally binding climate targets and/or carbon pricing schemes which commit them to rapid decarbonisation in the next few decades. These include:

These jurisdictions have all put more or less binding caps on their emissions from electricity and, oftentimes, many other sectors. This has a huge impact, not only on the emissions effect of having children, but also on other lifestyle decisions. In a system with a firm cap on total emissions, if you increase demand for coal-powered electricity, then you would increase demand for emissions allowances, but given the overall limit set, this would necessarily lead to reductions elsewhere, leaving overall emissions unaffected. This is known in the literature as the 'waterbed effect': if you push down emissions in one place, they pop up elsewhere, and vice versa (see the full report for more detail and nuance). Binding climate targets for jurisdictions can have a similar effect. For example, in the case of the UK, which has binding climate targets for the entire economy, it is difficult to see how having more children could affect domestic emissions rather than making climate targets slightly harder to reach (also see the full report).

Figure 3 summarizes how the estimates above change when taking policy into account, with the dark bars providing a more accurate picture if you live somewhere with strong climate policy. 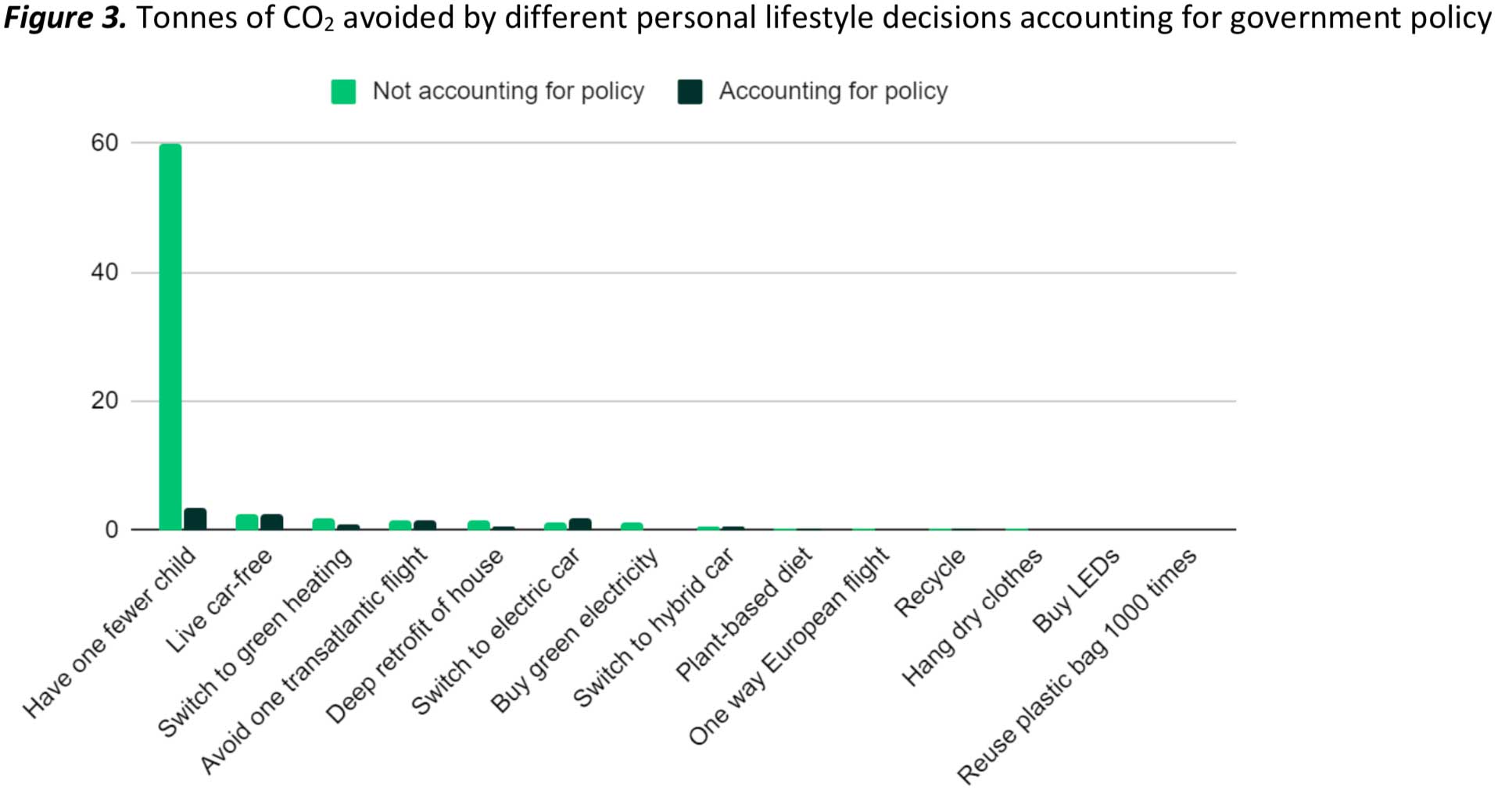 The biggest discrepancy here concerns the estimates of the effect of having a child. We think our estimate of the effect of having children is more accurate for people living in the EU or the US states discussed above. Indeed, even outside the US states with strong climate policy, we think the estimate accounting for policy is much closer to the truth, since emissions per head are also declining at the national level, and climate policy is likely to strengthen across the US in the next few decades.

Note that, while it might seem frustrating that policy can reduce the usefulness of lifestyle changes, the existence of climate policy is very much a good thing. Rather than relying on the voluntary virtuous behaviour of millions of citizens, policy can ensure that climate targets are met. And, rather than constraining the climate conscious individual, the ability to affect policy through donations to effective climate charities and/or political activism offers an opportunity for outsized positive climate leverage. In the Appendix to the full report, we also discuss how doubts about climate targets being met affect our conclusions (only marginally).

Figure 4 shows the effect of policy on other key lifestyle decisions, excluding children: 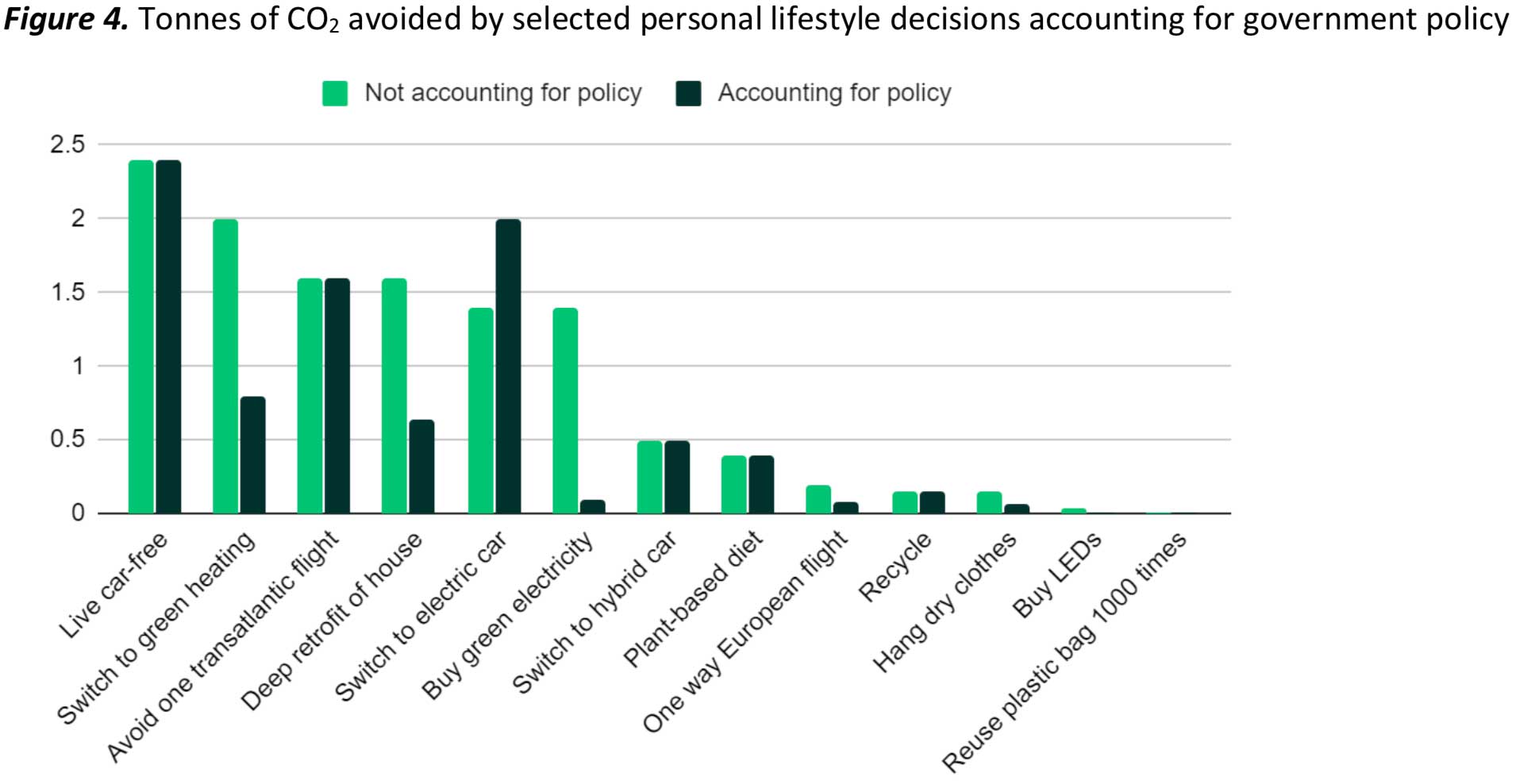 It is important to note that some of these choices involve major trade-offs: the chart above is not an all-things-considered judgement about the desirability of these actions. For example, having children produces benefits as well as costs, and we should consider these benefits and costs holistically, rather than focusing on only one negative effect children have (CO2 emissions). A deep retrofit of an energy inefficient house would produce large benefits for the climate but would cost $15,000 for the typical UK household. Similarly, switching to electric heating would increase heating costs by around 50%. This is money that could be donated to effective climate charities. This said, many key lifestyle choices, such as double glazing, switching to an electric car, or reducing unnecessary flying, driving or other forms of consumption, do not involve great sacrifice.

All of these estimates ignore the effect you can have on the climate by donating to effective climate charities. In the second post in this series, we compare lifestyle decisions to donating, and discuss whether your donations really offset your personal emissions.

What does this mean and not mean?

What we are saying:

What we are not saying: