Climate and Lifestyle: donations and offsetting

In the first post in this series, Climate and Lifestyle: policy matters, we discussed some of the most important lifestyle decisions for the climate and saw the effect that climate policy has on each person's potential impact. However, our analysis excluded one crucial lifestyle decision: donations to effective climate non-profits.

The potential impact of effective donations

Emissions per person vary considerably even across rich countries: the average American emits 18 tonnes of CO2 per year, whereas the average Swede emits only 7 tonnes. As a guiding rule, if you live in a rich country and live a typical lifestyle, then you probably emit between 5 and 20 tonnes of CO2 each year.

Our research suggests that Founders Pledge-recommended climate charities - the Clean Air Task Force and the Coalition for Rainforest Nations - have in the past averted a tonne of CO2 for less than $10 in expectation (i.e. after weighting the impact of the changes they worked for by the probability that the organisation actually made a difference), and potentially much less. Therefore, as Figure 1 shows, the expected impact of your personal donations is much larger than any of the lifestyle decisions discussed in the first post: 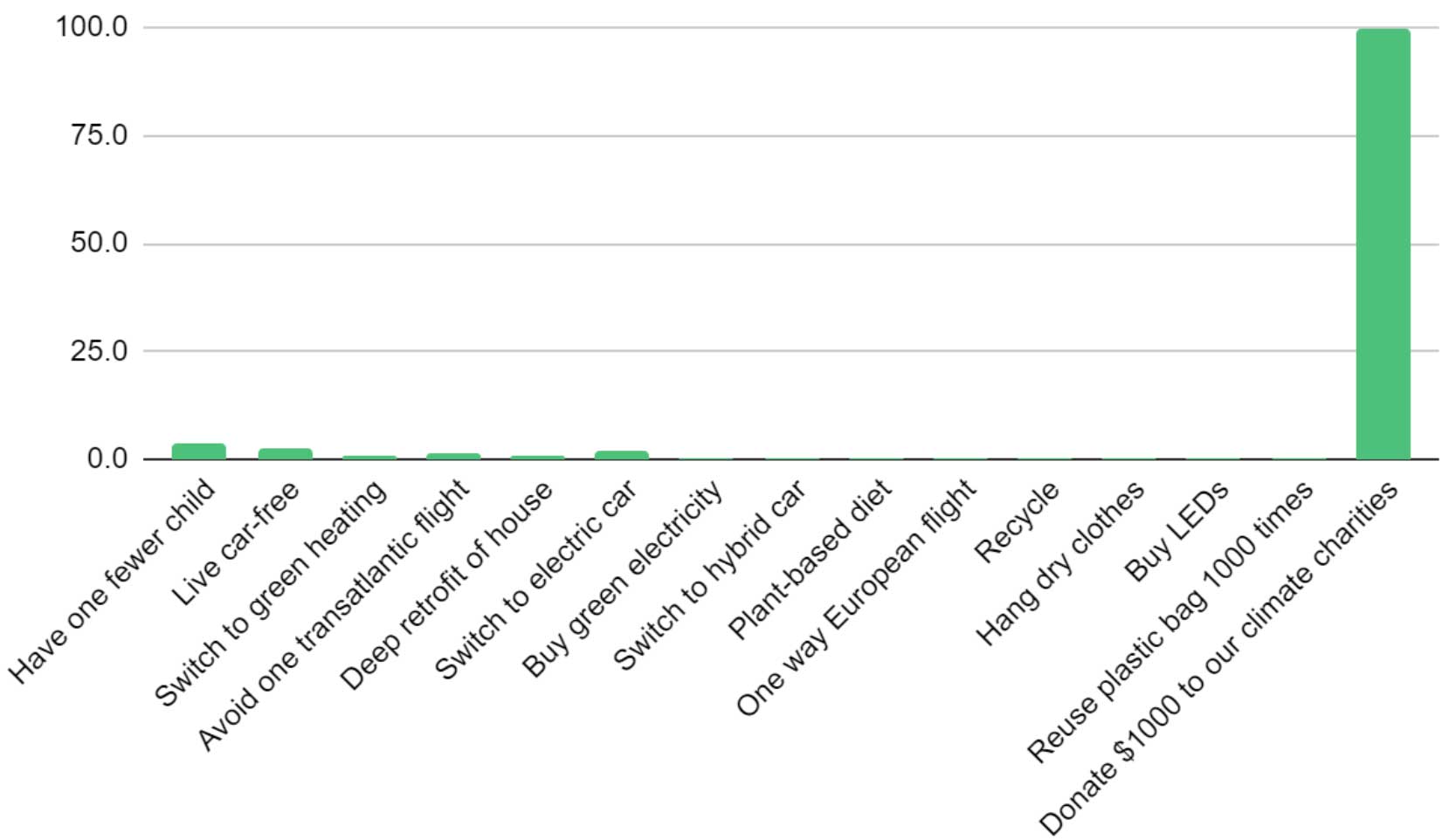 This being said, it is very important to choose carefully who you donate to. Many organisations offer surprisingly cheap carbon offsets, promising to abate a tonne of CO2 with high confidence for $1 or less. These figures are not realistic. The incentives are not set up well for organisations to provide reliable carbon emissions reductions. There is limited oversight of offsetting organisations' work, so they have an incentive to offer attractive price points without actually reducing emissions. Thus, choosing instead to donate to effective policy and research organisations is crucial. The impact is plausibly 100 times greater.

The limited ambition of offsetting

This raises the question: does donating offset the harm you do by emitting? We argue that looking at donating through the lens of offsetting is doubly flawed. Most importantly, it limits people's ambitions. People ask: how can I undo the effect of my own emissions? Instead, they should ask: how can I have the biggest possible impact on climate change?

If we only donate to offset our personal emissions and no further, then we hugely restrict our potential impact. A typical person emits 5-20 tonnes of CO2 each year. So if you assume that the most effective climate charities can abate a tonne of CO2 for less than $10, then you can offset your emissions for just $200 per year. Our recommended charities operate on budgets in the low millions but have led policy campaigns that have had a huge effect on global climate policy. Many people in wealthy countries could give more than $200 to support them, and thereby have enormous leverage.

Secondly, donating to effective climate charities almost never, in any meaningful sense, offsets the harm you do by emitting. To understand this, we need to get into the philosophical weeds. The two main contenders in moral philosophy are rights-based and consequentialist ethical theories. We will argue that neither theory entails that, in almost all normal circumstances, (1) donations to climate charities offset the harm of your other emissions, or that (2) you are morally required to offset your carbon emissions by donating.

Consider first the rights-based view of offsetting. Some lampoon carbon offsetting as being akin to infidelity offsetting, i.e. cheating on your partner and then offsetting this by paying someone else not to cheat on theirs1. Even though the net total amount of infidelity is zero, cheating on your partner and then offsetting is still wrong because someone has been harmed, and your offset does not undo this harm. Carbon offsetting does not undo your harm for the same reason. This argument could be grounded in the idea that people have a right not to be harmed by carbon emissions.

However, it is very unlikely that any offsetting scheme you fund will offset your carbon at exactly the same time as you emit. This especially true for high-risk/high-reward policy charities, which have a low chance of success but can produce huge payoffs. Let's compare two worlds, Offset and No Emissions:

Both of these worlds are very nearly equally good because they each have equal amount of cumulative CO2 emissions (and that is what determines peak warming). However, in Offset, the CO2 you initially emit does harm people by causing warming. Even though you reduce emissions one month later, this harm has still been done: the person made worse-off by your initial emission is still worse-off than they would have been if you had never emitted. This is indeed like committing adultery and then paying someone else not to 3.

In sum, it is not usually feasible to truly offset the harm from your past emissions. So, on rights-based views, donations to climate charities do not offset any harm you have done by emitting. On consequentialist theories, offsetting is always irrelevant, and we should instead try to do the most good with our donations. If stopping climate change turns out to be the best way to do good, then donations should be a top priority for the climate-conscious individual. For a more detailed treatment of these and more considerations, refer to our full research report on Climate and Lifestyle.

1 Pete May, “Offset Your Infidelity?,” New Statesman, accessed October 18, 2018, https://www.newstatesman.com/society/2007/05/cheatneutral-offsetting.
2 MacAskill, Doing Good Better, 173–74.
3 In Offset, after both of your actions have occurred – emitting and then later offsetting – someone is harmed by the warming you emit. Even if you offset only one second later, you would still almost certainly very likely affect who is affected and by how much due to butterfly effects in chaotic weather systems.