In our report on animal welfare, we suggest Founders Pledge members should consider donating to organisations working to help farm animals. The reasons for this are simple. Hundreds of billions of farm animals live terrible lives. There are effective organizations, funded through donations, that can improve the lives of farmed animals. So, if we believe it is important to reduce preventable suffering and we accept that animals suffer, then we should consider donating to effective animal advocacy charities that improve the lives of farmed animals.

But a donation given to an animal welfare organisation represents a donation not given to an organization working to alleviate poverty, distribute health supplies or protect humanity’s future. How can we decide between charities that help people and charities that help animals? Thinking through this question feels uncomfortable, and maybe even impossible. But if we don’t tackle it directly, we may miss out on great opportunities to do a lot of good.

In this blog, we discuss the three key considerations that may influence your decision to donate to animal welfare causes. These are:

We will try to address these questions quantitatively, but the final decision is shaped by our personal values.

How many animals are affected by your donation?

Because so many animals live and die in factory farms each year, we might expect there to be many organizations working to improve their lives. However, donors give just $150 million annually to organizations that advocate for farm animals. This amounts to 0.2 cents per animal killed. Animal shelters receive much more than this even though 6,000 farm animals die for every one animal that dies in a shelter. 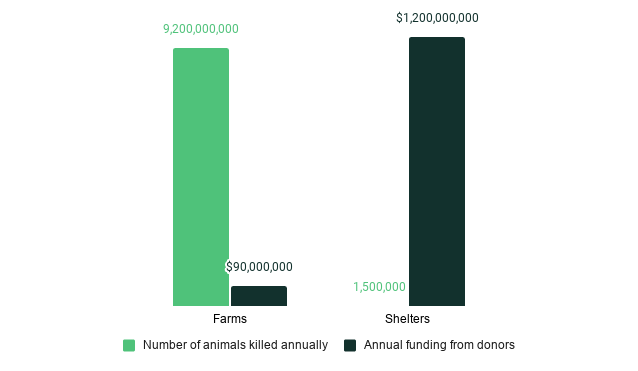 Because there are so many farm animals and so little funding for animal advocates, we think additional donations will unlock lots of good opportunities to improve the lives of animals. The corporate campaigns run by organizations like Compassion in World Farming, which aim to convince companies to voluntarily adopt higher welfare standards, affect the lives of dozens of animals for every dollar they cost. Our 2018 report on corporate campaigns estimated that every dollar donated to The Humane League causes “an outcome as good as shifting ten hens from a battery cage to an aviary system for one year.” We think this is a conservative estimate and the actual cost-effectiveness is likely to be somewhat higher. Global Food Partners, for example, works to improve conditions for animals in Asia, where there are 7.4 billion farmed land animals but just $6 million in annual funding for advocates. Other organizations which work on neglected issues like fish welfare, such as the Albert Schweitzer Foundation, have the potential to spare billions of animals from a painful death by suffocation each year.

How much does your donation improve the lives of animals?

The second important thing to consider is how much good these interventions do for each animal they affect. Unfortunately, this is more difficult to work out because our understanding of how animals experience the world is so poor. We have to do the best we can by using data about injuries and death rates, observing animals’ behaviour, and debating the merits of different systems and regulations.

One reason to think donations can improve the lives of animals by quite a lot is that their current conditions seem so awful. Factory farms are crowded and often dirty. Many farm animals are subjected to a range of cruel practices: farmed fish are left to suffocate to death, meat chickens are bred to grow so quickly that their organs sometimes fail, egg-laying hens spend their entire lives in small wire cages, and pigs have their teeth ground down or clipped to stop them from injuring each other. Animal welfare advocates have convinced companies to halt some of these practices voluntarily and lobbied governments to ban some of them outright.

Figure 2: A hen in a battery cage 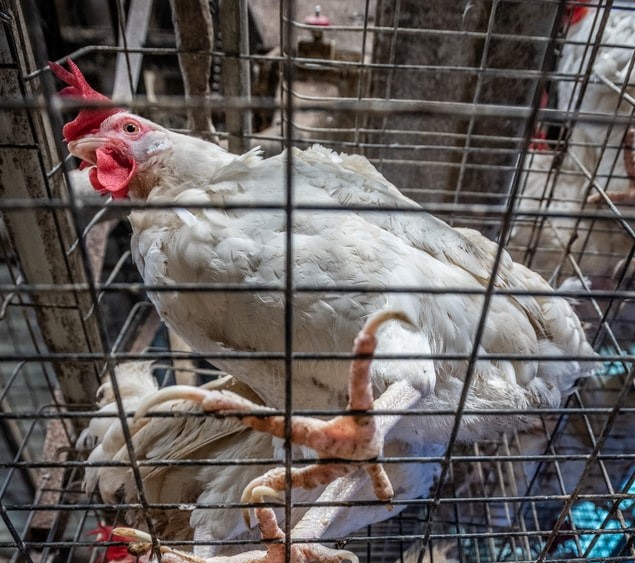 In other cases, though, it’s more difficult to determine how badly-off animals are. It’s sometimes disputed whether alternative systems are that much better. Some donors may choose to support The Good Food Institute, which works to end factory farming entirely by promoting alternative proteins. But for donors who are more excited about having an impact for animals right now, our view is that practices like suffocating fish and housing hens in battery cages are so bad that animals are very likely to be better off due to the actions of our other recommendations.

How much does this matter, in a moral sense?

It does seem likely that most farm animal species are conscious and can suffer (see section 1.3 of our report for a broader discussion). Most countries have animal protection laws that prohibit causing animals unnecessary pain, and we would judge people who hurt animals on purpose. But determining how much weight to give this pain so that we can compare actions that alleviate animal suffering to actions that help humans is very difficult. While we remain quite uncertain on this point, our current view is that the sheer number of animals affected by intensive farming means that animal welfare starts to look like a promising cause if we give them any significant weight at all.

One factor pointing in favour of animal welfare interventions is that their cost-effectiveness seems to compare favourably to interventions in fields like global development. GiveWell, our research partner for global health and development, currently estimates that it costs a high-impact organisation like the Malaria Consortium $3,400 to save one life. According to our cost-effectiveness calculations, an equivalent donation to an organization working on corporate campaigns would spare more than 34,000 hens from life in a battery cage. These animal welfare organizations can do good at a very large scale, simply because their actions affect so many animals and there’s so much work left to do.

However, if this estimate is far too optimistic, if animals are not much better off in alternative systems, or if the suffering of animals is not that intense or not that morally important, then donating to a global health charity may be more cost-effective. We have done some preliminary work on directly comparing a high-impact global health charity to a high-impact animal welfare charity using a range of what we think are reasonable estimates for important parameters. Our results suggest that neither charity dominates across common moral views. There is simply too much uncertainty regarding the welfare of animals and how it should be weighed in our decision-making. This means that a range of answers to the question of how to weigh animal suffering are plausible. Individuals must decide for themselves in order to make informed choices in line with their own values.

While we can’t say anything for certain, we think our animal welfare funding opportunities are excellent organizations to support if you care about drastically improving life for the huge number of farm animals suffering immensely around the world. This is a chance for Founders Pledge members to make change at a large scale, work on an important philanthropic cause often ignored by other donors, and support highly effective organizations that have a strong track record of success. By allocating a portion of your giving to animal welfare, you can join a growing movement working to end the suffering of billions of animals experiencing pain, squalor and poor treatment every single day.

Stephen joined Founders Pledge in 2019. Previously he was a Program Analyst for the United Nations Development Programme in Rwanda. He has also worked on climate change projects with the UN in Panama and the Youth Climate Lab in Canada. Stephen has an M.Sc. from McGill University and a B.Arts.Sci. from McMaster University.