SCI Foundation is a high-impact charity working to treat and prevent schistosomiasis, a neglected tropical disease affecting almost 240 million people today. We recently caught up with Dr Wendy Harrison, CEO of SCI Foundation, about the impacts of schistosomiasis, SCI Foundation’s work and why philanthropists should consider supporting their highly effective interventions.

Now is a great time to support SCI Foundation as ASCEND, a £220 million UK government programme to eliminate five neglected tropical diseases - including schistosomiasis - in Africa has just been terminated due to international aid cuts. We recommend SCI Foundation as an excellent organisation to give to based on research by our partner GiveWell.

Also known as bilharzia or snail fever, schistosomiasis is an internal parasite that primarily affects the gastrointestinal and urinary tracts. The adult worms sit in the blood vessels around those organs and produce eggs, and it's those eggs that actually do the damage. The eggs lodge in the lining of the gut or in the bladder, and they cause an inflammation that leads to very significant pathology. Schistosomiasis can even cause liver cancers and anaemia because you get blood loss as the linings of those organs are eroded, and the eggs can also pass into the liver and cause significant issues there. The lifespan of the parasite is also such that it can cause really chronic conditions.

One thing that is very challenging in terms of the control of these parasites is that they have an amplification mechanism. So when the eggs pass out of the infected person through faeces or urine, if that infected matter gets into a water body, then the parasite is amplified by snails, so just from one [larva], you can get thousands of parasites that can then infect people. And again, the real challenge is that it’s contact with contaminated water that actually causes infection. So you don't need a cut or any open skin. Unfortunately, we see it a lot in women who use water bodies to do washing, and in younger children who play in the water. There’s also data showing that babies - who are often sitting in the water while their mothers do washing - can also get the parasite in the long term.

We think that there's over 200 million people, primarily in sub-Saharan Africa, that are at risk of getting schistosomiasis. It's a very significant condition that has received very little attention. The interventions are very cost-effective, so there's real potential for having a significant impact.

What effects can schistosomiasis have on a person’s life?

There's some interesting data that came out fairly recently that suggests the long-term impacts of schistosomiasis have a very significant impact on school attendance. So studies done in Kenya show that having parasites can reduce school attendance by about 25 percent and also have a significant impact on the long-term productivity of people. The Kenyan study, which was co-authored by the now-Nobel-Prize-winning Michael Kramer actually showed that by treating children in school, you could increase their lifelong earnings by 40 percent, which is obviously incredibly impressive.

The parasite can also cause a condition called female genital schistosomiasis in women and girls, which is when the genital tract has eggs lodged in it and becomes inflamed, which not only is incredibly uncomfortable and distressing, but it also predisposes people to HIV infection. A study that was carried out in Tanzania showed that actually, there's about a 3x increase in risk of contracting HIV if you have got female genital schistosomiasis.

What is SCI Foundation doing to prevent and treat schistosomiasis?

In 2002, we started doing a proof of concept study, which was funded by one of the very first grants from the Bill & Melinda Gates Foundation, to see whether you could use Praziquantel to treat populations at risk. So rather than doing a sort of test and treat that, sadly, we're all very aware of now, we found we could just treat large at-risk areas and everyone in that risk area would be treated. This is very cost-effective because you don't have to do any diagnosis around it. And you can do it through a school-based platform, so it's a very cost effective way of doing it. 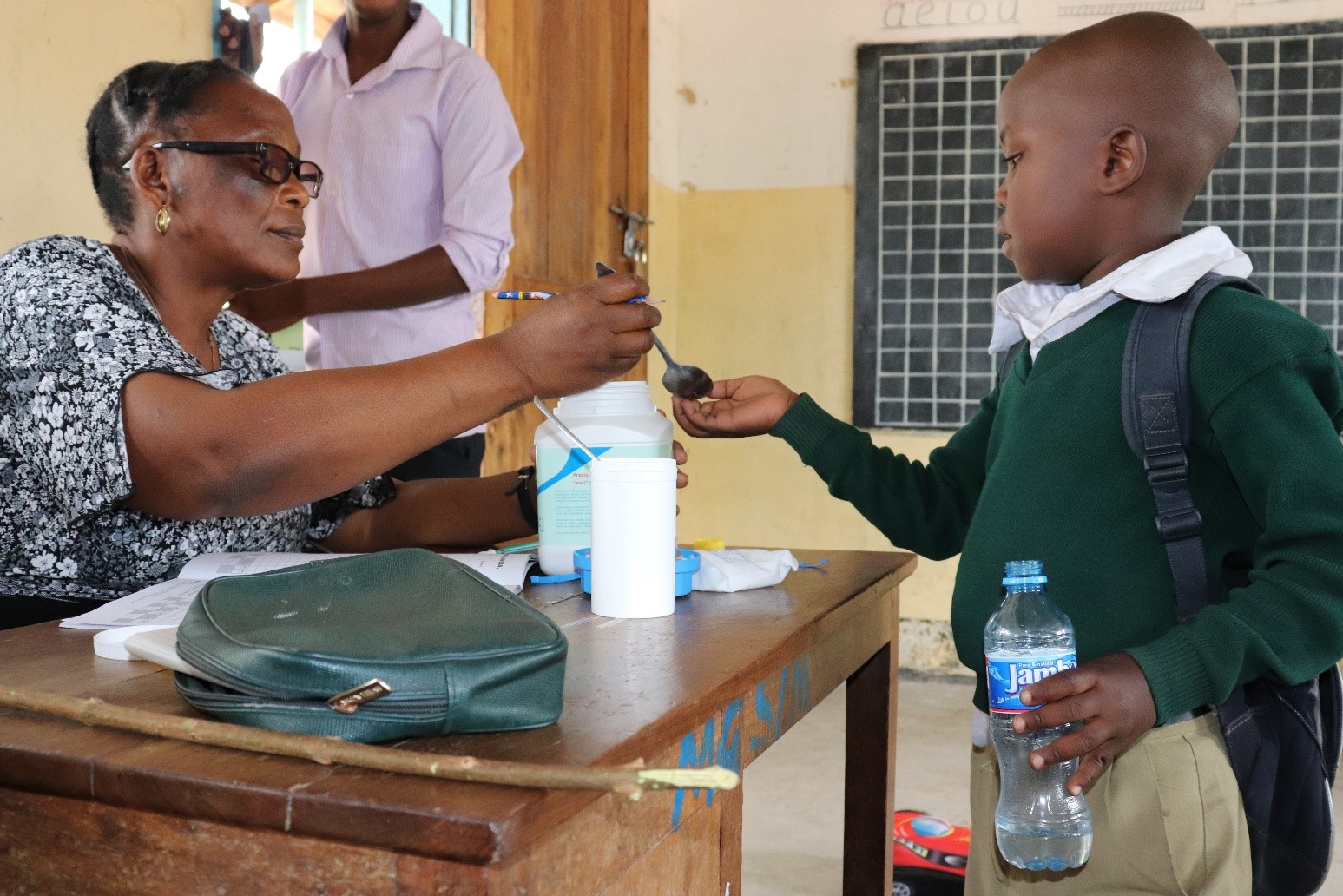 The other great part is that the pharmaceutical company, Merck KGgA, who are based in Germany and produce Praziquantel, have donated 215 million treatments of Praziquantel per year for free. So that is amazing and a huge leverage opportunity.

But we also see prevention as hugely important. So we are now also looking at how we can increase the impact of our drug treatment programmes with additional interventions.

The first one that we're really looking at is water and sanitation, because, due to the life cycle of schistosomiasis, preventing the contamination of the water in the first place could be hugely beneficial. However, it’s not totally straightforward because the disease results simply from contact with contaminated water. We've been very fortunate to recruit a senior health advisor from WaterAid to come and work with us. And so we've developed a water and sanitation for schistosomiasis strategy.

We also just received funding to carry out a project in Uganda that really tries to outline a set of tools that can be used to really push forward this kind of preventative angle. Of course, we fully appreciate that there are many water and sanitation organisations who obviously have a huge amount of expertise in this area. And so our approach is very much to work with those organisations. And really, it’s about trying to target existing resources in countries into areas where there's high schistosomiasis and also to tailor the type of intervention so that you get an impact. 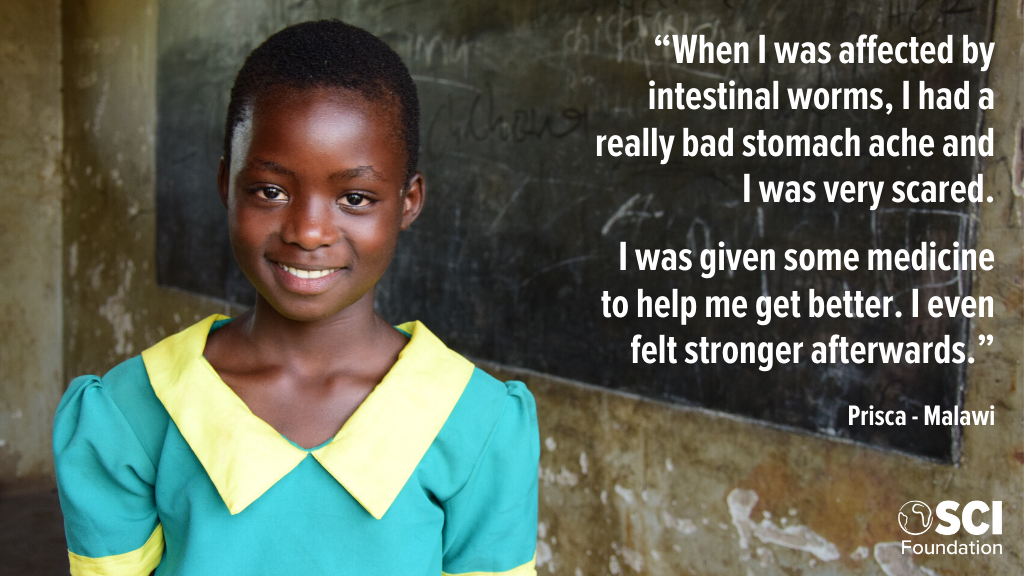 If they’re easily treatable, why are worms still so prevalent today?

Many of these parasitic worms were once very prevalent in many developed countries. And there's a great study from South America of how they eradicated these worms from areas that have very similar climates to where we are working. So I think the key issue really is actually just around access to resources. In many of the communities that we work in, they have very little access to water and sanitation and also to routine health services, and so it really is, unfortunately, just a symptom of lack of resources.

I think also the very challenging part is that it's an absolutely vicious cycle. And we always say that it's a cause and an effect of poverty. Because, obviously, you're in those circumstances where communities don't have access to those appropriate services, they then contract these diseases, which then significantly reduces their cognitive and also their kind of productive abilities. And then that means that they're less able to have access to services. So it's a very unpleasant vicious circle.

One of the key things that we're trying to do around that is to think about elimination. The WHO have just released last year a roadmap out to 2030, which actually does outline the steps to eliminate these diseases. We’re very fortunate that the Director of Neglected Tropical Diseases at the WHO is on our board, and we're absolutely committed to that kind of roadmap. And one of the key areas is this multi-sector collaboration, so really thinking about the prevention piece, as well as the treatment pieces.

We think 2045 is possibly a more realistic target and it's a significant challenge to get there. One of our key approaches is actually to support ministries of health to build capacity, both within their own ministries and also in their communities. And we feel that a sustainable way of doing that is really ensuring that we transfer all our knowledge that we've co-created with those countries. So we spend a lot of time not only on the technical piece, but also on project management, financial management, and wherever we can we want to transfer that capacity and knowledge to those countries and also learn from them too. 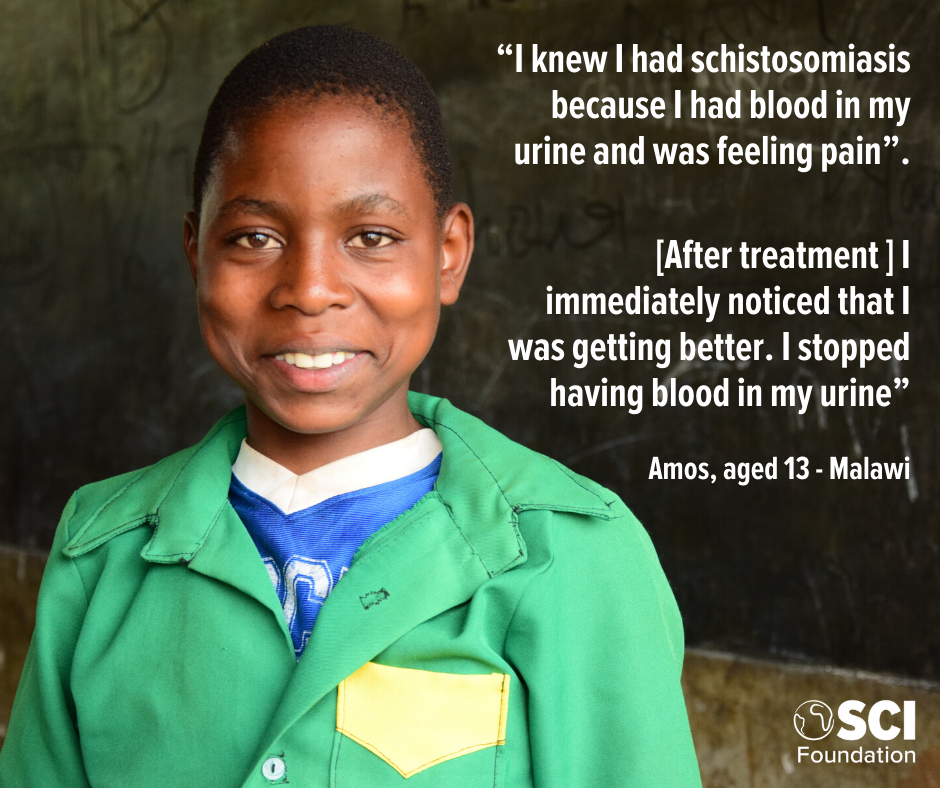 From my experience of working with Founders Pledge members, they're always incredibly dynamic and have a very keen sense of ensuring that they make an impact in any of their chosen fields. And we think that the interventions that we support deliver that as they’re incredibly cost-effective. They're shown to have both very significant short- and long-term impacts on communities and really aim to be able to allow those communities themselves to realise their own potential and perhaps go on to be the next generation of entrepreneurs and young people that find solutions to very significant challenges. And I think the way that we work very closely in partnership supporting the capacity development of governments themselves, it's a very cost-effective way of working.

If you’re a Founders Pledge member and would like to donate to SCI Foundation or learn more about the charity, you can get in touch with us at advisoryservices@founderspledge.com. Both members and non-members can also support impactful global health interventions through our Global Health & Development Fund.

Wendy is CEO of SCI Foundation. She trained and practised as a vet, holds a PhD in clinical pharmacology and previously worked with NGOs who donated livestock to low income countries.

Wendy is skilled in comparative medicine and working across sectors. She has extensive leadership experience and has led the way on shaping SCI into what it is today.

Wendy loves travelling with her family and experiencing new cultures. She also has a keen interest in psychology and organisational development.