Photo by Samuel Branch on Unsplash.

With the passage of the Bipartisan Infrastructure Law and the Inflation Reduction Act (together thoroughly reshaping and upgrading the US energy innovation system), as well as the midterm elections behind us, it is worth asking how the US climate action and philanthropy space has changed.

And, critically, how should our climate giving and grantmaking change in light of these developments?

To start, though, we will ask a much more narrow question: what happened and how can we make sense of it from a global perspective?

As we hopefully predicted in our 2020 report on the implications of Biden’s win for climate philanthropy, the last two years have seen dramatic progress in US climate policy with three major pieces of legislation having passed: 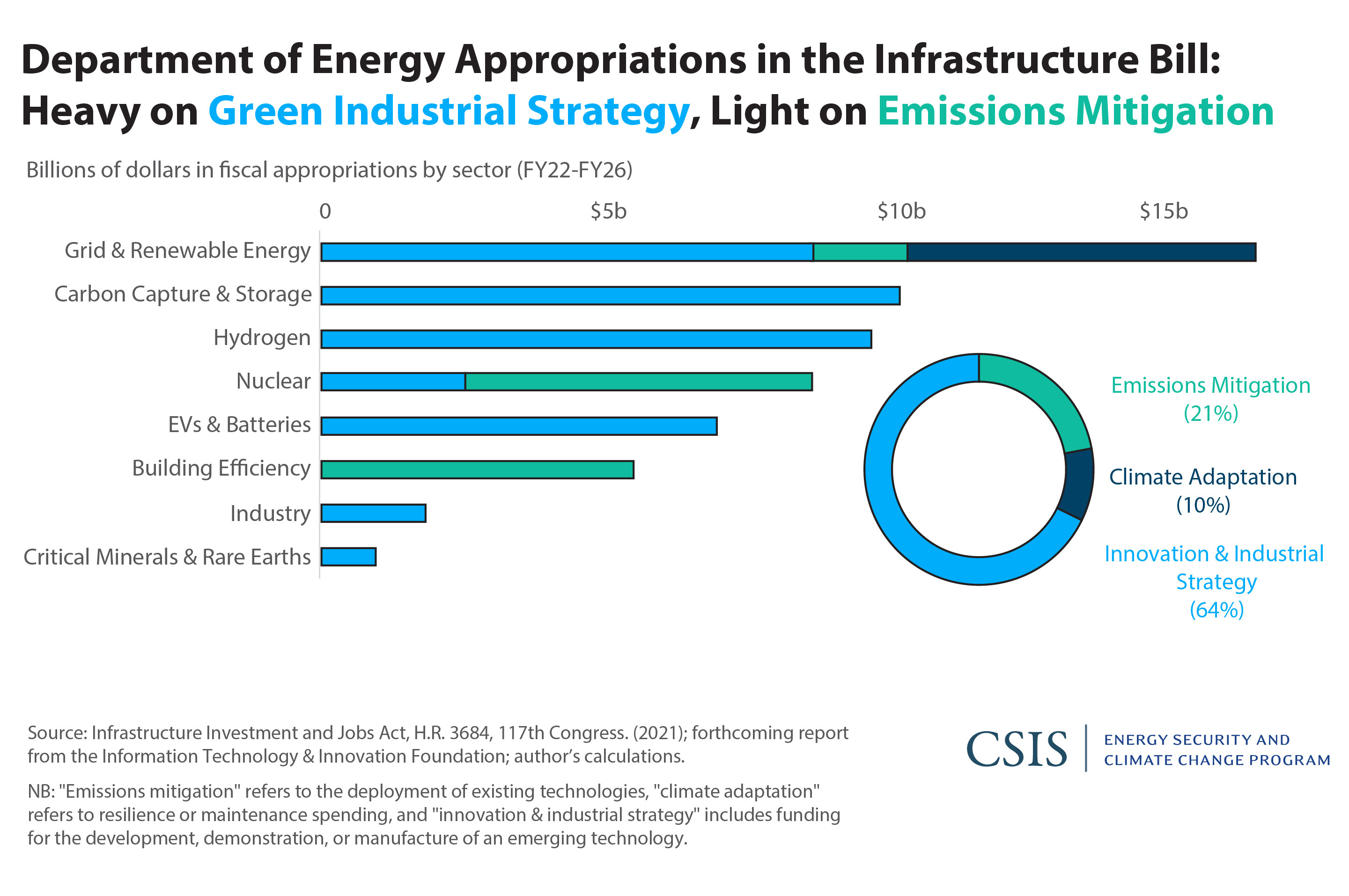 The sum here is more than its parts.

Together, they constitute a trajectory-changing moment for US climate policy, reshaping the outlook on US emissions as well as clean energy progress.

For anyone who wants to dive deeper, American climate journalist David Roberts’ podcast series on the Inflation Reduction Act is excellent listening, while the Information Technology and Innovation Foundation (ITIF) provides a thorough analysis of the Bipartisan Infrastructure Bill (here and here), and this joint piece by various organizations provides a great introduction to the Office of Clean Energy Demonstrations (OCED), one of the most exciting institutional innovations of recent bills.

II. The global significance of US climate wins

While a lot of the discussion, in particular around the IRA, has focused on how much closer these developments will put the US towards its 2030 target, the real significance of the IRA and the other bills lies in their global effect over this century – with total cumulative US emissions reductions until 2032 (over 10 years for a total of 6.3 gigatons (GT)) in the order of 12% of current annual global emissions (around 50 GT). Put differently, this means that, despite its tremendous significance for US climate policy, the IRA and other climate policies will shave off just more than 1% of global emissions directly over this decade per year.

Luckily, there are at least two powerful mechanisms for these pieces of legislation to have much wider global effects – policy leadership and innovation.

Before we dive in, a brief note on methodology. Throughout the course of the following exploration, we will often use rough “back-of-the-envelope” estimates that are certainly wrong and imprecise. The reason for this lies in the nature of what we are talking about, namely, indirect uncertain effects through space and time. While it might seem objectionable to put rough numbers – guesstimates – on these effects, we think it is important to do so because the alternative, just mentioning those effects as an afterthought or a qualitative consideration, effectively sets those effects to zero even though they might be the most important ones. Treating effects as zero just because they are uncertain or evolve over time is likely more misleading than approximating effects with rough estimates (see also here for a related argument as to why we should not just ignore uncertain effects).

While the recent COP27 conference has been a disappointment in not achieving commitments for more ambitious global emissions cuts, it appears likely that the strengthened US climate policy effort will help achieve more ambitious targets in the future, compared to a counterfactual scenario without passage of the IRA. It also seems likely that, had the US not passed the IRA, the risk of backsliding on global targets would have been even larger.

Unfortunately, it is very difficult to say anything specific about these effects, but the basic emissions math – any one country being small in terms of global future emissions – and the expected leadership role of the US, suggests that the effect is large. Even if the existence of a strong US climate policy framework (the IRA) only reduced global emissions outside the US by 1% through its effect on inspiring action and avoiding backsliding, this effect alone would almost double the IRA’s effectiveness (increase it by 70%).1

As we have seen in the discussion above, two of the three most significant climate bills of the Biden agenda – the IIJA and CHIPS – are explicitly focused on innovation, seeking to achieve progress on climate through changing the technological trajectory.

But even for the least innovation-focused of these bills, the IRA, the main effect on global emissions will likely be induced technological change over time, rather than short-term reductions in US emissions.

To understand this, consider the example of clean/green2 hydrogen -- a key lever to decarbonize sectors where direct electrification is challenging.

In ICF’s modeling of the IRA, clean hydrogen achieves the largest cost-reduction across all modeled technologies, suggesting a 60% reduction in cost, compared to the counterfactual of no IRA. Rhodium Group’s analysis independently models cost-reductions for green hydrogen at 60-90% cost-reduction through the IRA by 2030. Crucially, Rhodium Group’s analysis also suggests that this would lead green hydrogen towards being cheaper than high-carbon alternatives by 2030 in the optimistic case (low-cost assumptions) and close to cost-competitiveness in the pessimistic case (a high-cost scenario): 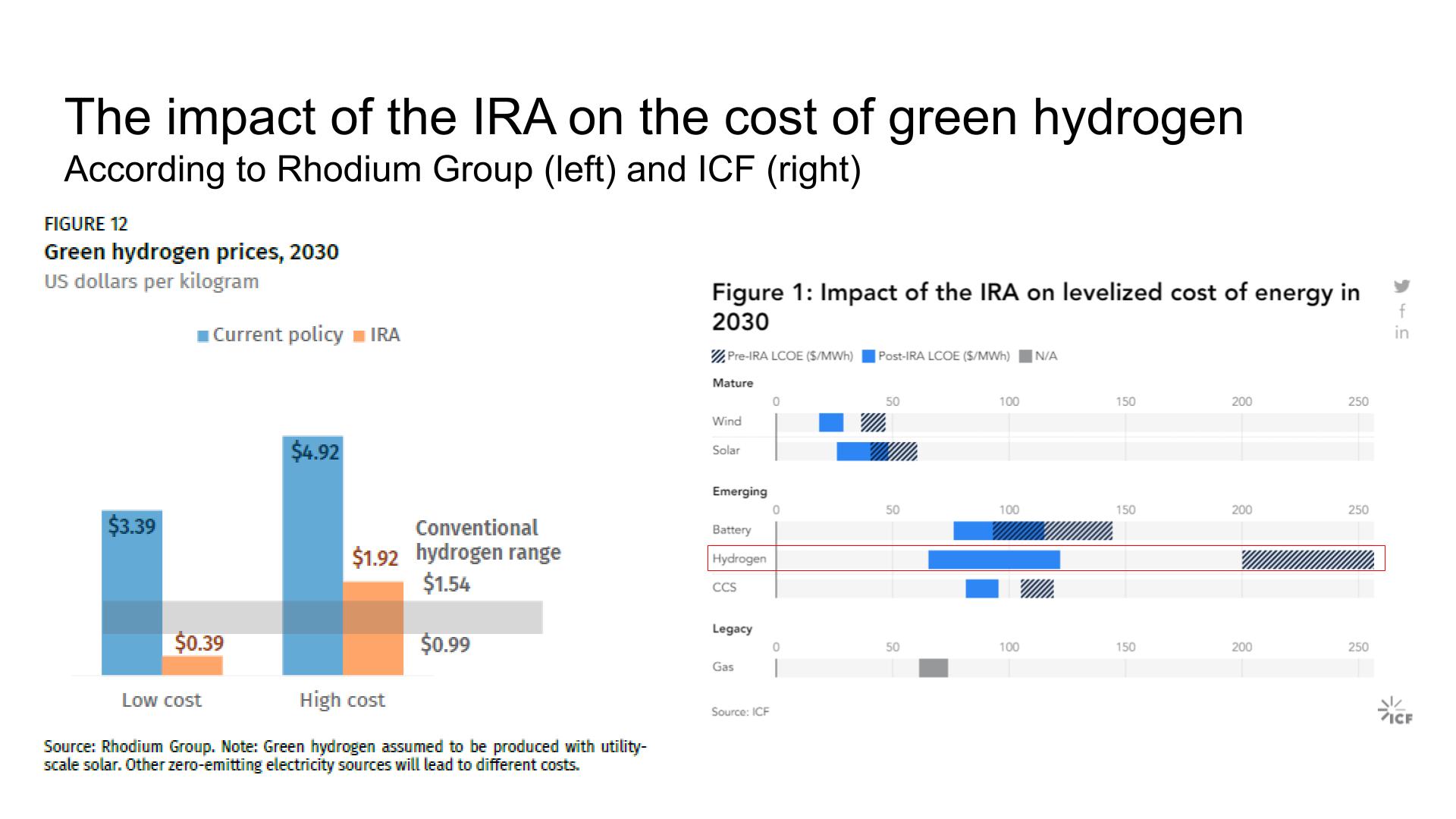 A conservative back-of-the-envelope calculation -- assuming that this acceleration of trajectory in green hydrogen, with cost reductions of 60-90% by 2030 (!), would only lead to a three-year acceleration of achieving a 5% abatement of global emissions through green hydrogen -- would suggest an emissions reduction of 4.5 GT from the green hydrogen component of the IRA alone. So, even under these conservative assumptions, the innovation effect of trajectory change in a single technological pillar would be close to the total estimated emissions effect of the IRA in the US over the next decade (6.3 GT).

Meanwhile, of the estimated 6.3 GT in total emissions reductions in the US over the next decade (by 2032, i.e. two years beyond the 2030 target, according to REPEAT Project 2022, p. 6), about ⅔ will be in the power and transport sector, primarily through the deployment of renewables and electric cars -- technologies where the innovation effects of additional deployment will be considerably lower than for less mature technologies.3

For example, even though the IRA is expected to lead to a massive increase in solar capacity additions -- a 5x increase in solar capacity additions by 2025 compared to 2020 (REPEAT Project 2022, p. 11) -- additional levelized cost reductions in solar through the IRA are only estimated to be in the 30% range compared to a 60% reduction for green hydrogen (ICF).4

Furthermore, these cost reductions are less relevant than for other technologies given both that solar is already competitive on the levelized cost of electricity (LCOE) in many locations and that the key constraint is not levelized cost, but rather availability, siting, transport and storage infrastructure.

III. What this means for climate activists and philanthropists

We are thus in a situation where the following is likely to be true:

Thinking long-term and globally changes what is most important

To see this more clearly, consider the following visualization which tries to make reasonable estimates (data and some reasoning here) on the relative value of different parts of the legislations on US emissions until 2032 (using published estimates where available) and on the long-run global consequences. Note that this is about additional emissions savings through the legislation, not the total potential of those technologies, and that the estimates about innovation effects are intentionally conservative to bias against the argument we are making.

While those estimates are, of course, highly uncertain, and we hope to refine and expand on them in the future, here they are really just meant to more clearly make an important point that should be uncontroversial, but is – we believe – underappreciated: given that US emissions until 2032 are a small part of future emissions, but that the US is a major energy innovator – and much more so with the recent policy wins – we should appreciate the significant leverage that comes from helping make sure as many of those innovation bets as possible are successfully realized. 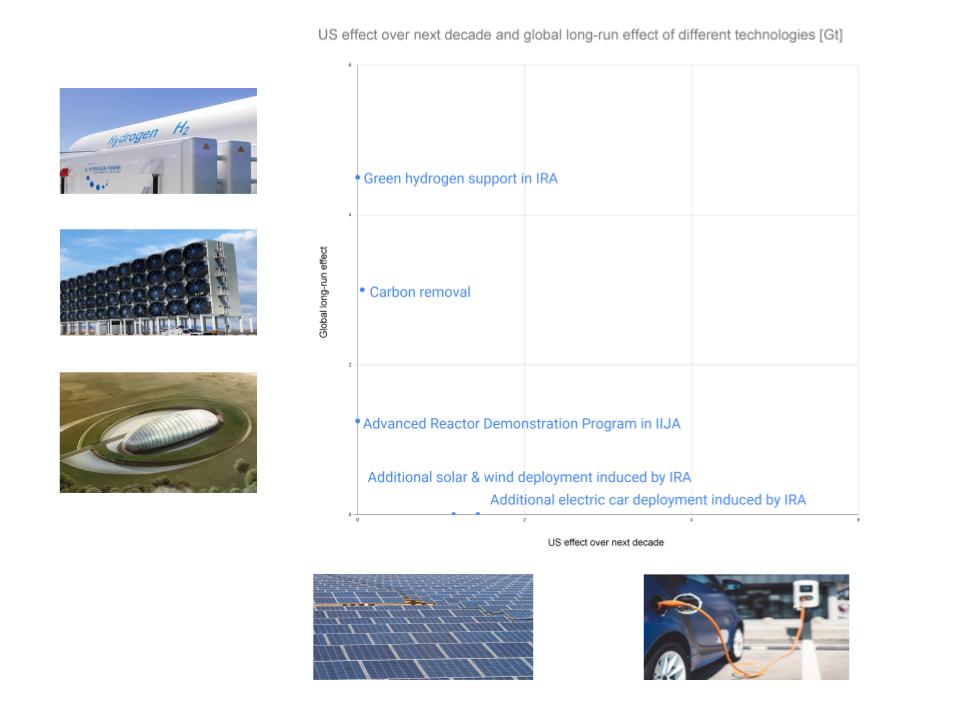 What to look for when evaluating success

If 1 to 3 above are true, this has a couple of surprising implications for how to evaluate the implementation of Biden’s climate bills:


While it is unlikely that these ways of tracking progress will be entirely disjointed – after all, both stronger local action and stronger innovation policy become more likely with stronger overall support for climate policy – they are far from perfectly correlated. At the very least, this makes it important to look at “other signals” carefully in addition to emissions reductions.

However, the most important implication for action comes from comparing estimated importance to estimated existing attention and tractability.

Firstly, because activism, existing clean energy interests, and the overall mainstream climate discourse are heavily focused on short-term local or national targets as well as deploying mature technologies, impact-oriented philanthropists seeking to improve the trajectory of less mature technologies have the benefit of acting in a less crowded space where additional funding can make a larger difference.

Importantly, because policy support at early stages is often less politicized as it requires fewer jurisdiction-level regulations and controversial siting decisions, there is also an argument that one should expect improving earlier-stage support to be more tractable philanthropically, e.g. by funding the research and engagement of new offices, such as the OCED, maximizing the positive effect of the improved institutional and funding environment.

One should not take this view to the extreme and be entirely “surgical” –– all climate policies profit from a policy and regulatory environment where it is easier to build things, and where the overall support for climate policy is higher. And, indeed, this is very much a marginal argument given what everyone else is doing (i.e. not everyone should change tack!).

But in a situation where the implementation of the IIJA, CHIPS, and IRA, as well as the push for new additional climate policies, will lead to a continually crowded advocacy space, it is worth remembering that some projects, policies, and budgetary choices are much more important than others and, crucially, that our discourse’s focus on short-term local emissions reductions will often lead us astray as to what those important actions are. When trying to have the most positive impact on shaping the climate trajectory, a clear-eyed view of the global ramifications of different local actions is crucial, and something we will continue to work on and talk about in more detail going forward.