This is a summary of our charity report on Action for Happiness. The full report can be found here.

Please note this page was last updated in 2020. While our overall views remain unchanged, some details may be out of date.

Almost everyone cares about experiencing positive well-being: to be happy and satisfied with life, and free from negative emotions and depression. Often, when we try to improve the world, we try to increase people’s economic status or their health, but it is often unclear how well these things translate into subjective well-being.

For instance, as Figure 1 shows, increasing income only has a weak effect on increasing subjective well-being.1 Here, household income on the x-axis is shown on a logarithmic scale: the gap between $1,000 and $2,000 is the same as the gap between $32,000 and $64,000. The data suggest that income has a rapidly declining effect on subjective well-being the richer you get: increasing your income from $1,000 to $2,000 has roughly the same effect as increasing your income from $32,000 to $64,000. There is evidence that the effect declines to zero once equivalised household income reaches around $95,000.2 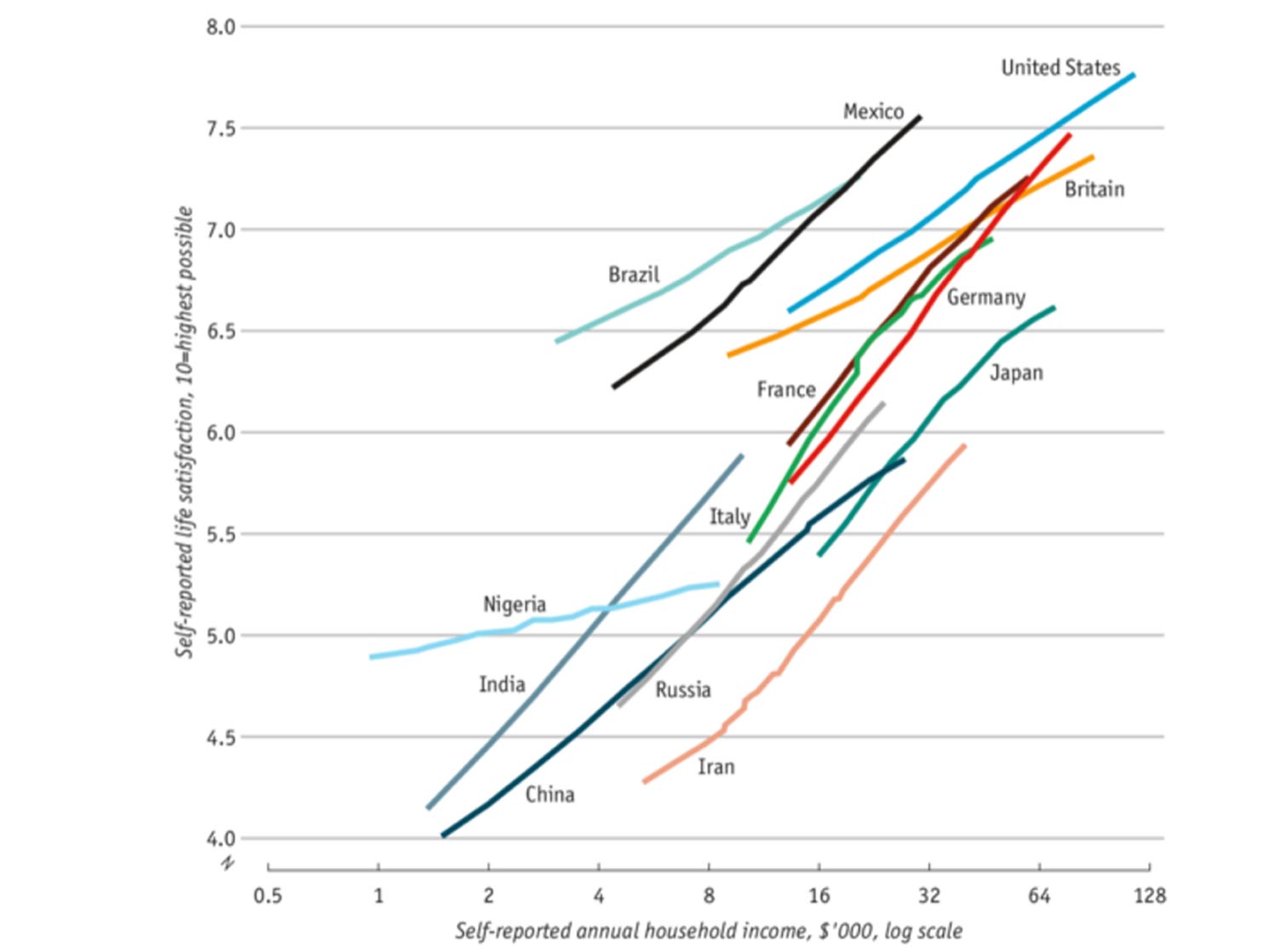 There is also evidence that health problems have a much smaller effect on subjective well-being than one might imagine.3

The case for focusing on subjective well-being

Because income fails to track subjective well-being accurately in some cases, it is important to look outside the typical realm of economic analysis when identifying the best opportunities for improving people’s lives. By failing to consider subjective well-being directly, it is possible that many philanthropists and governments miss out on some outstanding opportunities to do good.

Over the last year, the Founders Pledge research team has explored ways to increase subjective well-being directly. During the course of this research, we came across the charity Action for Happiness. Their programme seemed promising in improving participants’ subjective well-being, and their scale-up seemed like a highly leveraged funding opportunity. This prompted us to carry out a more in-depth evaluation, resulting in our recommendation and this report. We plan to expand our work on how best to improve subjective well-being in the future.

Action for Happiness (AfH) is a UK-based charity that brings people together in small, face-to-face groups to explore what really matters for a happy and meaningful life. AfH is trying to build a community of people transforming their own lives to be happier and to help those around them. AfH provides 8-week courses, called Exploring What Matters (EWM), run by volunteers in their local community. The course aims to help people to tune in to what really matters for a happy and meaningful life, connect with others in meaningful face-to-face conversations, and to take action to boost happiness for participants and for others. Most courses to date have taken place in the UK, but courses have also been run in 20 countries around the world, including the US, Australia, Germany and Italy.

Action for Happiness helps people to live a happy and meaningful life, predominantly through its 8-week Exploring What Matters course, which is run by volunteers in their local communities. Action for Happiness is seeking funding to scale-up to reach 5 times more people through the EWM course and to run sustainably at this larger scale.

Is there evidence the intervention works?

The main evidence for the efficacy of the Exploring What Matters course comes from a recent randomised controlled trial (RCT) of the programme. We also considered data routinely collected by AfH to measure the effect of the course, as well as less direct evidence, in the form of another RCT of a similar course designed to improve subjective well-being.

Is the intervention cost-effective?

We estimated the cost-effectiveness of Action for Happiness in terms of reduction in depression and gains in happiness and life satisfaction. Reductions in depression are given in terms of DALY-equivalents averted and years of severe major depressive disorder prevented. DALYs measure the burden of disease by accounting for the premature death (mortality) that it causes and for the years lived with illness (morbidity) it causes: a DALY burden can stem from premature death or from short-term or long-term ill health. The disability weights of different diseases range from 0 to 1 (no disability to 100% disabled). One DALY can be thought of as one lost year of healthy life.

We estimated cost-effectiveness as follows:

What are the wider benefits?

The Exploring What Matters course also improves other subjective well-being measures, such as compassion, worthwhileness and anxiety, and increases in self-reported measures of social trust and pro-social behaviour. By running these courses and other related activities, Action for Happiness is building a movement for happiness and prosociality, the benefits of which could be large but are not taken into account in our cost-effectiveness model.

Is it a strong organisation?

Action for Happiness has a good track record and takes a keen interest in measuring its effects on participants through a recent RCT and ongoing measurements of its effects on course participants. The organisation has been transparent in its communication with us.

Aidan joined the research team at Founders Pledge in August 2019. Prior to working at Founders Pledge, he studied at the University of Oxford. He graduated with a First Class MMathPhil in Mathematics and Philosophy, specialising in formal epistemology, decision theory and ethics.

Before joining Founders Pledge in early 2018, Sjir advised Dutch municipalities in setting up experiments with elements of basic income, and organized coordination between experiment initiatives on an academic, political and governmental level, crowdfunding his own ‘basic income’ to independently do this for two years.

In 2017, he co-founded Effective Altruism Netherlands (EAN), where he currently serves as Chairman of the Board.